The Route Reservoir command uses a Discharge-Storage Rating Curve to represent flows out of the pond and storage within the pond. The general idea of pond sizing is to adjust this rating curve so that the requirement on target flow control can be satisified. In this case, we are looking to meet pre-development peak flows. In other words, the peak flows under the post-development should not exceed the pre-development levels.

1. Initial guess of the rating curve

To open the rating curve, select the Route Reservoir on the canvas, navigate to the Properties window and click the button next to the Rating Curve. Type in the PKFW of the RouteChannel 2002 of “Existing Conditions” into the discharge cells DISCH. To find the proper STORAGE, we start our trial with an initial guess as shown in the figure below. Run the model. Then, open the Scenario Comparison under the Simulation tab to check the result under the initial guess of rating curve. The figure shows that the peak flow under post-development (the red line) is higher than the target flow (the purple line). 2. Adjust the rating curve to meet the target flow

Revise your rating curve until the peak flow matches with the target.

In the scenario “Proposed Conditions” a suggested rating curve is given. 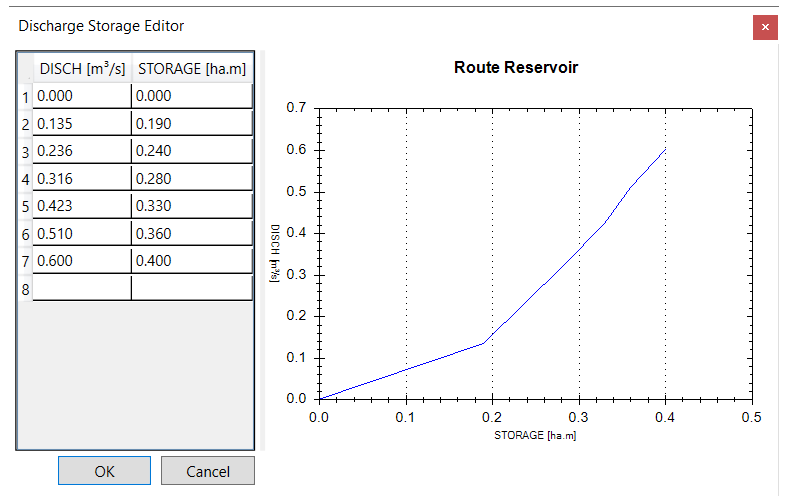 By using that rating curve, the target is met. You can also click on the Detail Output with the Route Reservoir.