The standard IUH is used mainly for urban areas with pervious and impervious contributions calculated separately. 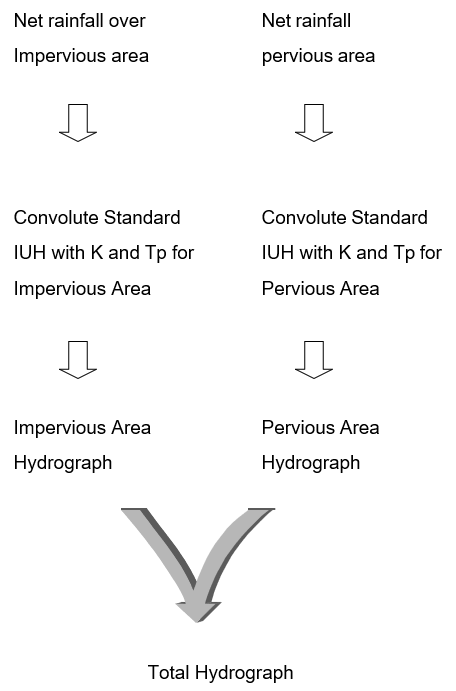 The standard IUH was developed and tested in Germany by Verworn and Harms in 1978. It is used in the model HYSTEM. In Visual OTTHYMO, Tp > DT and therefore, for a given storm, Tp varies with the size of the watershed. (The URBHYD command in OTTHYMO 83 is equivalent to a STANDARD IUH with the time to peak equal to the time step, DT).

A relation derived from overland routing by the kinematic wave method (Peterson and Altera) gives the storage coefficient, K. This relation is close to the relation by Neumann used in HYS-TEM.

where:
L = an equivalent flow length which requires calibration. A default value for impervious areas obtained from

where A is the watershed area, was frequently tested with measurements. For pervious areas, the default value is L = 40 m, representing an average travel length on inter-spaced green areas.
n = the roughness coefficient. Testing shows that adequate results are obtained it n = 0.013 for impervious areas and n = 0.25 for pervious areas.
i = the dominant rainfall intensity (maximum average intensity during K).
s = the characteristic slope in m/m.
C =a constant (0.00775 for L in feet, i in inches/hour).

The STANDHYD command is based on analysis of comparisons with measurements and practical applications. In STANDHYD, the dominant rainfall intensity is averaged over the duration of K. Since K varies with rainfall intensity this IUH varies from one rainfall to the other, the STANDARD IUH is a quasi-linear model.

For the impervious area, the time to peak, Tp, in the STANDARD IUH of Visual OTTHYMO is equal to the storage coefficient, K. For the pervious areas, fragmented in backyards and connected to storm sewers, Tp is equal to K pervious + K impervious, at time of convolution, Tp is rounded to the nearest multiple of the time step, DT.

For watersheds with large estate lots and semi-urban areas with relatively large pervious components, it is recommended to simulate two component hydrographs:

The equivalent urban area and the imperviousness of this area (e.g., say 30 %) satisfy the following rule of thumb: