The Flood Studies Report (FSR) design storm was developed in the United Kingdom. Rainstorm profiles of historical events were examined, and the cumulative percentage of rainfall for different probabilities of storm peakness was developed. The peakness of a storm was defined as the ratio of maximum to mean intensity. A study of summer and winter storm profiles showed that summer storms were more peaked than winter storms. The curves of storm peakness were published by the National Environment Research Council (NERC, vol.2,1975).

The FSR design storm duration is selected so that the largest peak flow calculated at each point in the system is taken as the design discharge. The developers of the FSR design storm found that the peak discharge is not very sensitive to the storm duration, a doubling of duration caused a change of less than 10% peak discharge. Therefore, a fairly coarse series of rainfall duration may be used; values of 15, 30, 60, and 120 minutes are recommended. The return period is selected to be the same as that of the required discharge. This is usually established by the local government agency.

The rainfall depth is determined using a procedure developed for all of the U.K. Using maps and a formula, the depth for a particular return period is computed. The depth can also be computed from a depth-duration-frequency curve.

The antecedent moisture conditions were examined and incorporated into the model developed by the FSR. The antecedent conditions are expressed by the Urban Catchment Wetness Index (UCWI). Runoff simulations were conducted on a catchment using a variety of UCWI’s for return periods between 1 and 10 years. An optimum UCWI was found for the catchment that resulted in good predictions of the peak flow. Similar studies were conducted on other catchments in the U.K. An analysis of the optimum UCWI’s and rainfall data for the catchments led to a relationship be-tween the UCWI and the Standard Average Annual Rainfall (SAAR). This relationship can be used to determine the UCWI for any location in the U.K.

The FSR design storm recommended for use in the U.K. has the following properties:

Some things to consider before applying this type of storm: A) the FSR design storm peak intensity always occurs at the centre of the storm. B) A local analysis of historic events is not conducted to determine the time-to-peak. C) The FSR design storm was developed for use in the U.K. only. A similar analysis would have to be conducted if it was to be used outside the U.K. 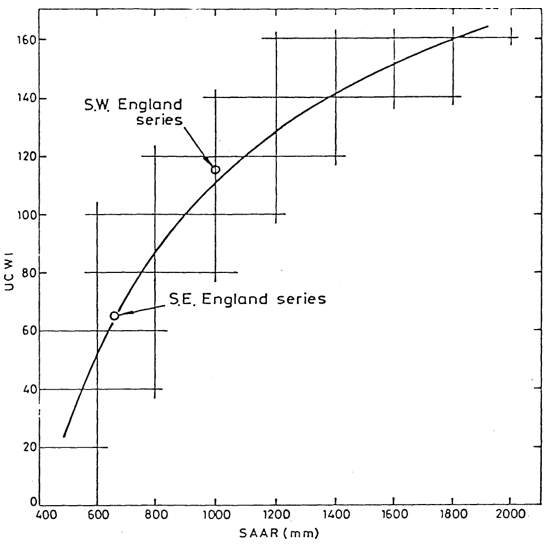 RELATIONSHIP BETWEEN UCWI AND SAAR