This is a second type of design storm developed by the U.S. Soil Conservation Service. The SCS 6-hour design storm was developed for designing small dams. The duration is selected as 6 hours or the time of concentration, whichever is larger. The rainfall depth is determined from maps of probable maximum precipitation or from the 6-hour precipitation depth for a 100-year return period. The hyetograph profile is determined using a 6-hour design storm distribution, an example is shown in the figure below. 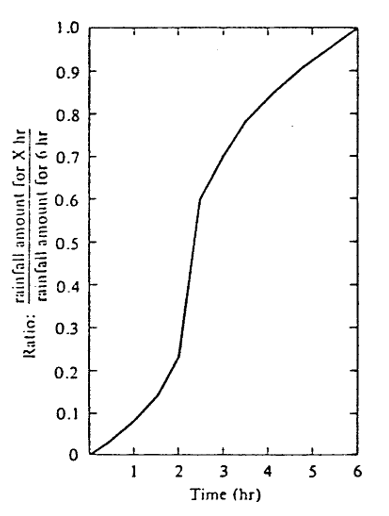 This storm was developed for use in conjunction-with the SCS method of runoff computation. With the SCS method the rainfall depth and duration must be known. The watershed soil type and antecedent moisture conditions are also important. These catchment characteristics are reflected in the SCS curve number. The amount of direct runoff is computed using the total precipitation and the curve number. The hyetograph shape is not important in determining the direct runoff with the SCS method. It is important, though, when the runoff is computed using a single event simulation model.

The rainfall depth for the SCS 6-hour design storm has not been determined using Canadian meteorological data. It therefore should not be used on Canadian catchments unless local data is used.

The return period is much larger than is typically used in urban drainage design. The design storm was developed for rural conditions and should therefore not be used in urban areas.