The Illinois State Water Survey (ISWS) design storm is based on research conducted by Huff (1967). Huff examined storm events in central Illinois having durations between 3 hours to 48 hours. He divided the storms into 4 groups depending on the time period in which the majority of the rain occurred. The storms with the most of the rain occurring in the first quarter of the event duration are termed first quartile. All of the storm events that examined were placed in one of the four quartile groups. The rainfall mass curves in each quartile group were determined for various probability levels. It was found that short duration storm events dominate the first and second quartile. For this reason, the median distribution in the first quartile is commonly used for design. Terstriep and Stall (1974) recommended that the first quartile storm with the 50% probability level be used as the design storm with the Illinois runoff model. 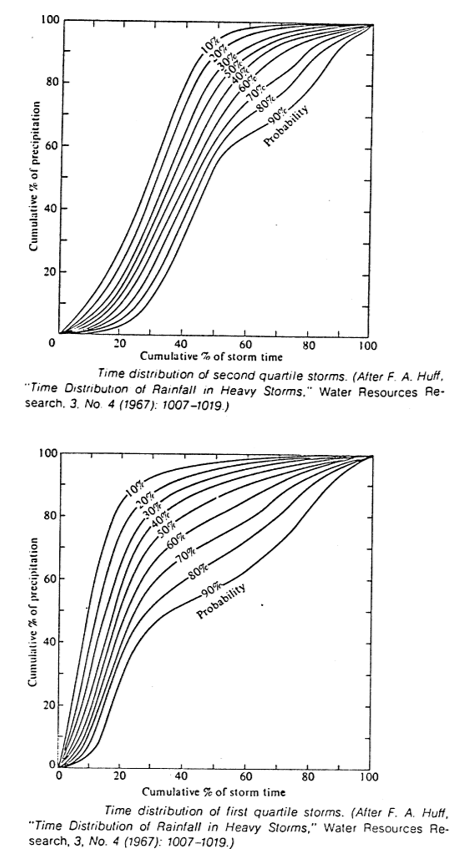 The ISWS design storm is determined by selecting a design storm duration. The maximum depth for the duration and the given frequency are derived from local data or from an IDF curve. The rainfall depth is then distributed according to the Huff quartile median distribution.

The ISWS design storm is derived in a similar way to the SCS design storm. When it is used in Illinois it has the advantage of being developed from an analysis of local data. An analysis of rain-fall similar to Huff’s analysis is required if the rainfall structure is to be known for a region other than Illinois.