On two of the catchments the urban area routine URBHYD of OTTHYMO was used. Impervious conditions of 35% and 50% were used on urban catchment No.1 to observe the change in difference between the design storm peak flows. On the third urban catchment the SWMM simulation program was used. A schematic of this catchment is shown in the figure below. 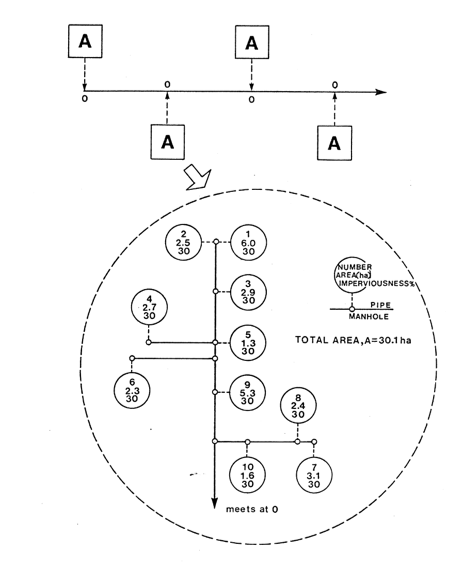 SCHEMATIC OF CATCHMENT NO. 3

A mixed land use watershed in Metropolitan Toronto, having a rural area of 1597 ha. and an urban area of 5536 ha., as also tested. The flows on this watershed were found using the OTTHY-MO model. The total area contained 21 urban subwatersheds and 12 rural subwatersheds. They ranged in size from 53 ha. to 778 ha. The urban subwatersheds had an imperviousness of 35%.