It is, of course, best to obtain Tp by calibration with measurements. If data is available, the following procedure may be utilized to estimate Tp. 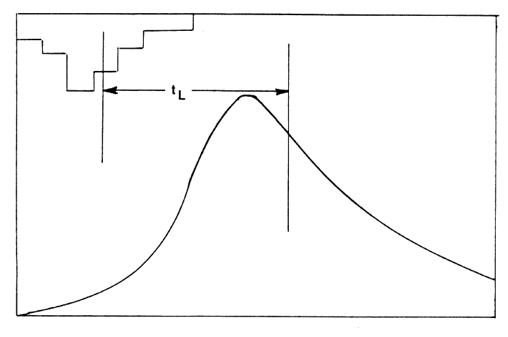 which is defined as the time difference between the centroids of the rainfall excess hyetograph and the direct runoff hydrograph (after subtracting baseflow).

is related to n and

in the Nash conceptual model by

is determined and n is estimated by 3 for example, then

can be obtained by equation 16.

Since measurements are usually available only at the outlet of a watershed, the

values would still have to be determined for each subwatershed after discretization. The main parameters that affect

are the slope and the area. Since in small watersheds the slope does not vary too much, an approximate relation

can be utilized. With the calibrated

at the outlet, constants m and n can be obtained by trial and error.

In the Seymaz and Etobicoke studies, the Williams and Hann equation for t_p was found adequate. For smaller watersheds, the

values obtained can be checked by using the velocity charts in the SCS TR-55 tables (1975) for overland flow and swale flow.