Flow simulation for urban drainage studies is mostly done with one-event simulation models. The single event models determine flows produced by a single storm event. Continuous simulation models require rainfall data over a continuous period for the desired length of analysis. A frequency analysis is then conducted on the peak flows so that a flow of a desired return period may be found.

The flow with a single event model may be found by using a series of selected historical events or by using a ‘design storm’. The historical storm series may be selected using a continuous simulation program or by analyzing a rainfall record using a selection criteria. Each event in the selected series is then run through the event simulation model. The generated peak flows are then analyzed to determine their return period.

– storm duration selected using an iterative procedure. The design storm is tested using different durations. The one with the largest peak flow is selected.

Each of the design storms has a different hyetograph shape. Storm hyetographs were constructed and compared for some of the design storms. A five-year return period was selected and the storm volumes were obtained from the Bloor Street station (Toronto) IDF curve. The duration of the storms are not all the same, for this reason the storm volumes are different. The storm hyetographs for the Uniform, Composite, Chicago, SCS 24-hr., ISWS, AES, FSR, and Yen and Chow design storms are shown in the figures below. 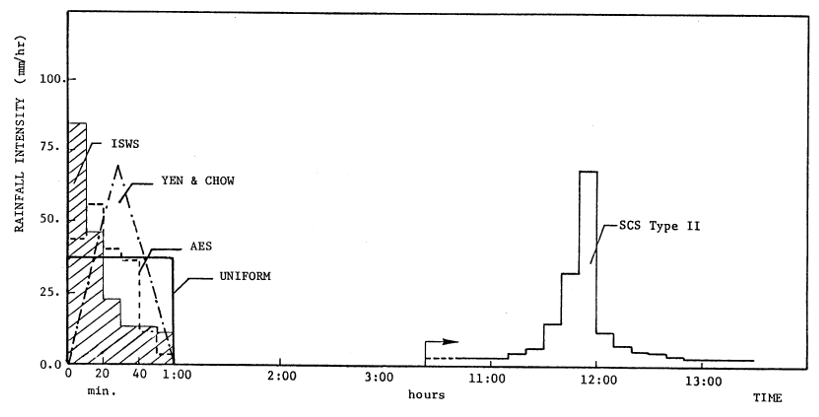 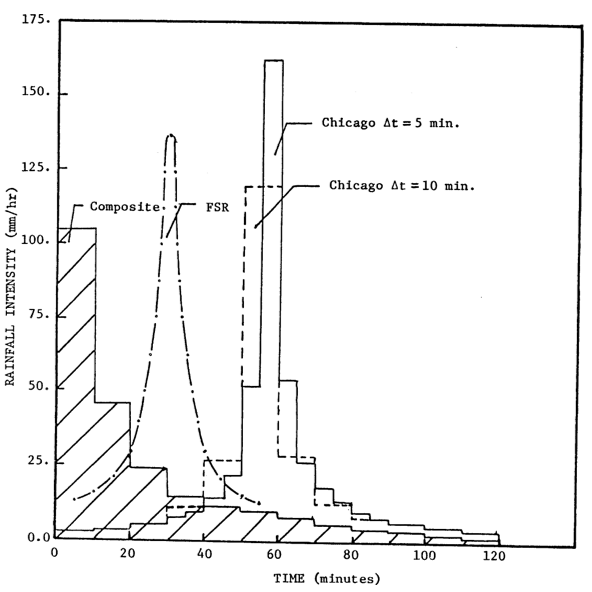 Some of the disadvantages of design storms are that: