This section includes the following tools.

Click the Add Node/Link button to open the window where users can add different types of objects. 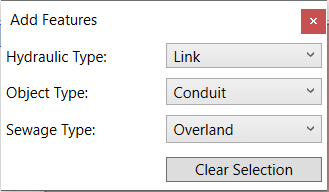 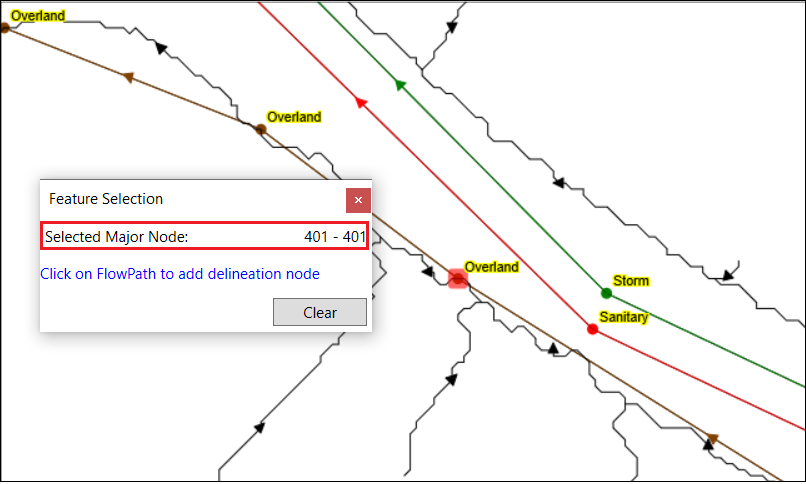 If users want to add delineation nodes for a different major. Keep the window of Create Delineation open. Click the desired Major Node, check the Selected Major Node field is updated and then click on the flow path.

Tips: users can keep the Create Delineation window open while navigating on the map to the desired location by scrolling the mouse to zoom in/out or holding the middle wheel to pan the map. In case the location is far away from the current location, users can close the Create Delineation window, navigate to the desired the location and then reopen the tool.

Sag area is modelled as a Storage Unit. The Storage Curve is automatically measured from the DEM. To add a Sag Node, click the Create Sag Node button. In the pop-up window, choose the sag layer in the drop-down list of Sag Intersection Layer. If users want to add conduit links between major node and sag node, check on the box Enable Auto Connection. If users only want to add a sag node and make connections later, uncheck the box.

Sag area can be modelled as a Storage Unit. VOSWMM can measure the Storage Curve from the DEM.

Click the Start button on the Create Sag Node window. Hover your mouse cursor to the map and the mouse cursor changes to the Edit mode. Click anywhere on the Sag Area. The place where you click will show a red dot. Move your mouse to the flow path where you want to place the Storage Unit in the sag area. Snap on the flow path. The snapped Vertex is in a red box. Click to add a Storage Unit node on the flow path. The Storage Curve is automatically obtained and shown in the table of Create Sag Node window,