The tools in DEM Processing are used to process the DEM file. The processing results are the basis to create overland system. In general there are five steps in DEM processing: Fill Sinks, Build Walls, Generate Flow Path, Create Sag Layer and Assign Layers. User can either use those tools individually or directly use the Run DEM to set up all the steps and run processing. If users want to use the tools individually to go through the whole procedure of DEM processing, it is recommended to run those tools one by one in a sequence as shown below.

Fill Sinks is used to remove small imperfections in a surface raster. There are cases where one of the cells is surrounded by cells that have higher elevations. In that case the flow would be stuck at that cell. Fill Sinks will raise the elevation of that cell so the flow could continue onwards. The processed result will be added to the map.

The purpose of using Build Walls tool is to prevent flow from flowing through buildings. Users can give an unreasonably high value in the field of Inner Wall Elevation and the elevation of buildings will be raised to that level in the DEM. The processed result will be added to the map.

*It is recommended to choose the processed DEM from previous step Fill Sinks in the field of DEM Layer of Build Walls.

Generates the Flow Path layer using the DEM. Flow Direction and Flow Accumulation are created through intermediate steps. The detail of the flow path can be adjusted with parameters. In the drop-down list of Burn-in Stream Layer, choose the stream or river to be burned in; otherwise leave this field empty. There are two ways to define discretization level: 1) area 2) # of Cells. They defines the area or the number of cells can be accumulated before it is branched. The less the value is, the more defined the flow path will be. The processed results of Flow Path, Flow Accumulation and Flow Slope will be added to the map.

*It is recommended to choose the processed DEM from previous steps Build Walls in the field DEM Raster File of Flow Path Generation. 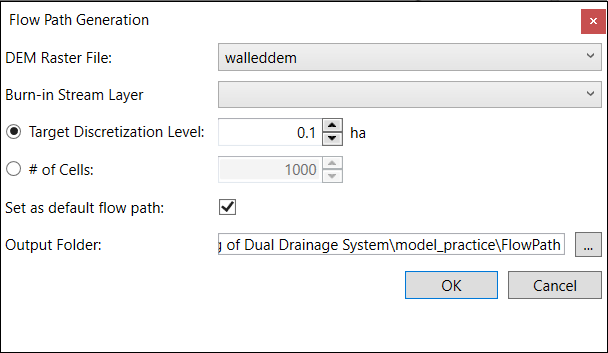 Use the DEM to determine the locations which are considered sags. This is required to model any sag areas as storage units, or to model any ponds (if pond data was not given). Open the Sag Layer tool. The minimum size of the sag can be set using the Minimum Sag Area parameter.

Open the Assign Layers tool. Assign the layers from the drop-down list of each field. 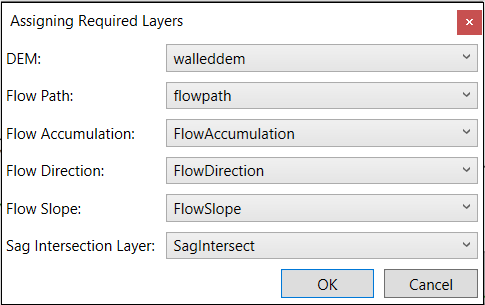 To un-assign a layer, choose the empty item in the drop-down list. 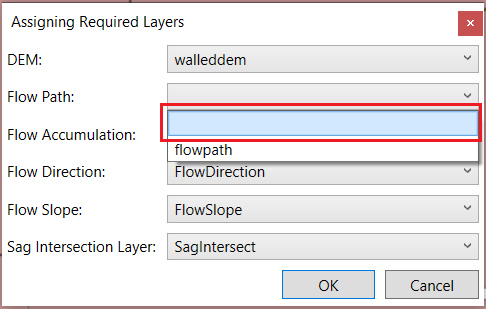 This tool is to run all the tools above in one click. The procedure will follow the sequence and recommendations as described above.