The Ellipse tool allows a user to draw an ellipse by specifying a centre point, first axis endpoint, and second axis endpoint.

Note that some CNC equipment will not read/render an ellipse! In FlexiCAD version 3.1.1.0 and later, an Ellipse can be exploded into a polyline consisting of tangential arcs by right-clicking and selecting ‘Explode’. This will create a very close result.

Alternatively, select ‘Explode Ellipse (into arcs)’ from the drop-down menu under ‘Explode’ on the ‘Change’ ribbon. Follow the prompts in the command window to compare and accept the results of exploding the ellipse into a polyline of arcs. 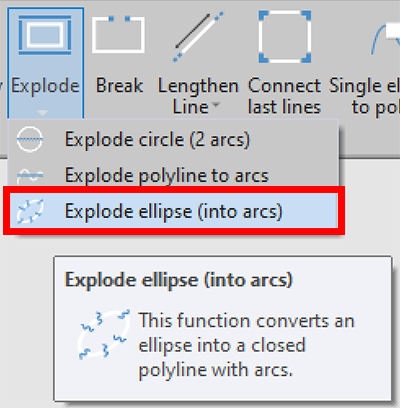