The XML importer for the PRG Vx76 console will support large (multi gigabyte) XML files. The ‘Import Options’ dialog now has options to allow you to choose which cue data stacks to import.

It is worth noting that while the XML will load, very large files may still run out of memory if many stacks with thousands of cues are imported.

The importer used in prior Moving Light Assistant versions can still be used by holding the Option key on the keyboard when choosing the File->Import Console Data->Vx76 XML... menu item.

You will be prompted to choose the file to open. Open the file you recently exported from the console software. Once the file is chosen, a dialog will appear allowing you to select which data types you wish to import. 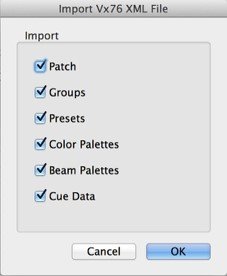 If there is already console data in the show file, you will be prompted if you want to ‘Merge’, ‘Replace’, or ‘Cancel’.

Replace – Replace will delete all the existing console data in the show file and import the XML file.

Cancel – Will exit and not delete or import any data.

A progress dialog will appear showing the progress of the XML import – for large shows this may take a while. Once the import is complete, check the ‘Import Log’ for any errors. It should now be possible to use Moving Light Assistant to analyse and work with the data in the same way you can with other supported consoles.

Note that because there is not a standard naming for parameters across fixture types, the intensity parameter will be renamed within Moving Light Assistant as ‘Inten’.

Importing Whole Hog 2 Data
Importing Timecode
Thanks for your feedback.