Devices such as Cable boxes, Video Conferencing units may require end user Input to identify an alphanumerical string such as phone number or favorite channel. In prior versions of Kramer Control, the programmer needed to identify these strings and program these strings into button widgets. The end user was then left with the buttons the programmer designed and if they required additional buttons, they would need to re-enlist the programmer to configure these buttons.

With the addition of the User Input Function, the end user now has the ability to use the native keypad of the client interface to enter their own characters. By following the process below you can create this type of setup for your users.

In order for a User to input a unique value for their system, you will need to add Parameterized commands to your button widgets. Parameterized commands appear within Categories as a singular option, but when added to a button prompt a popup to appear over the Builder Window. The image below shows the Digit command from a Cable Box – found within the Keyboard category. To enable User Input, select the Advanced Options link within the popup

After selecting Advanced Options, the popup window changes. Choose the option for User Input, and enter a description that will be read by the end user within the Client application 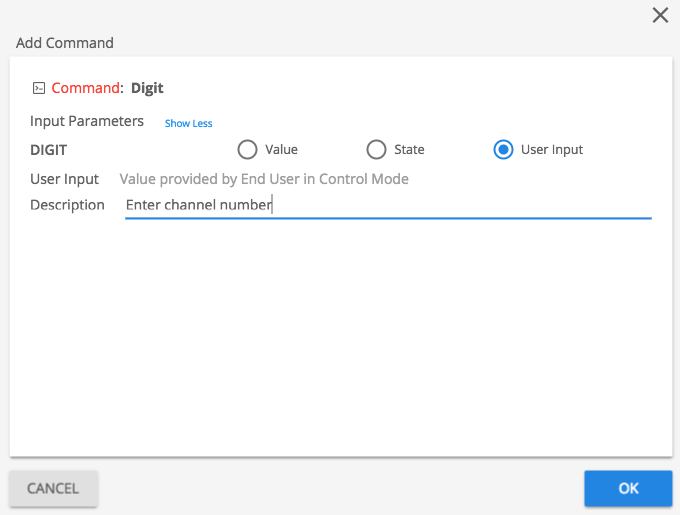 In the above example of entering a channel number for a cable box, you will need to add multiple User Added Values to the macro. Entering a channel such as 202, would require 3 User Values in the tap section of the button widget.

Other devices, such as Video Conferencing units, may provide the Programmer the ability to enter a full string for a phone number or email address. User Input values can also be used with these commands, and would not require additional commands added to the button due to the full string of the command being added by the end User.

Make sure your Devices are assigned to Gateways then Publish your changes.