Because there have been a handful of revisions to the SE breakout module since its introduction, this section documents the changes and updates made for each revision.

Part Number and Circuit Board Revision

Customers have been confused (and rightly so) because initially Pulseroller changed the Part Number for the SE module upon each revision because these revisions changed the functionality of the module. It was often interpreted by customers that the markings on the Printed Circuit Board (PCB) were the part number. Actually, the markings on the PCB are the PCB’s revision level. For part numbers SE-2, SE-3, and SE-4; the PCB revision matched the part number because there were functional changes with each revision. However since the SE-4 PCB revision there have been no functional changes to the SE breakout module and no part number change. 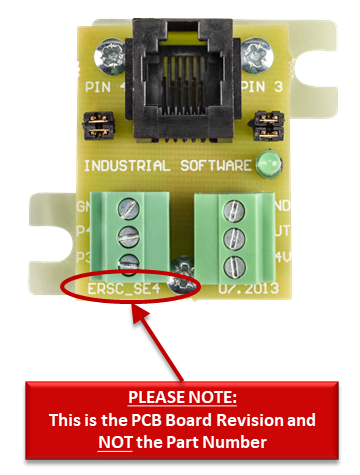 In order to support previous revisions to the SE Breakout Module, the following items describe the functionality and possible limitations of each revision.

Original design providing bias diodes for the Pin 3 and Pin 4 inputs to allow solid state PLC output modules to operate without inadvertently triggering the PNP/NPN auto detect feature of the ERSC. This design also provided the Control Port Output amplifier to allow higher current devices to be connected to this output. The OUT signal is PNP only.

!Because the Control Port Output is in an indeterminate state upon ERSC boot up; the OUT signal could possibly momentarily energize upon initial power up or re-boot of the ERSC. Users must take proper care when using the OUT signal in their control system logic.

This version contains a modification to block the OUT signal from energizing during the ERSC’s initial power-up or re-boot sequence. Thus, users no longer have to worry about an inadvertent OUT signal being energized during initialization or reboot of the ERSC. For convenience; an LED has been added that illuminates when the OUT signal is being energized.

This version contains a diode circuit that blocks an external power source from back-feeding into the ERSC’s Control Port power. Users can now provide external power for devices connected to the Control Port in cases where these device’s power requirements exceed the maximum limits of the port.