There are some money-laundering services available for cryptocurrencies. These services are variously called mixers, tumblers, foggers, and laundries. They take in funds from multiple customers, mix those funds, and then output the mixed funds. The purpose of these money-laundering services is to obfuscate the origin and receipt of cryptocurrencies. They typically charge between 1% and 3% per transaction for their services.

Mixers Explained
These are secret organizations that make it difficult for the governments in their laws against money laundering on Bitcoin (Reid & Harrigan, 2013). They are used to mix money from one person with money from another person, so it isn’t easy to know what belongs to whom or where it is coming from, as it is mixed money. This process consists of sending one’s money to the anonymous service. Later the same amount is returned but mixed with bitcoins from other individuals (Criptonoticias, 2016). This way, the transactions history of any client in the accounts book is hidden, that is to say, the blockchain, so it becomes easier to laundry money without being detected. A ‘mixer’ is efficient, e.g., it keeps hidden laundered money when it has many subscribers.

Some of these services have stopped servicing clients in the wake of regulatory enforcement. In July 2017, for instance, Bitmixer.io terminated its service.

We are seeing these money-laundering services beginning to take advantage of large-scale advertising platforms for acquiring new customers. The example below is an advertisement on Google AdWords for Coinmixer, a Sweden-based cryptocurrency money laundering service. 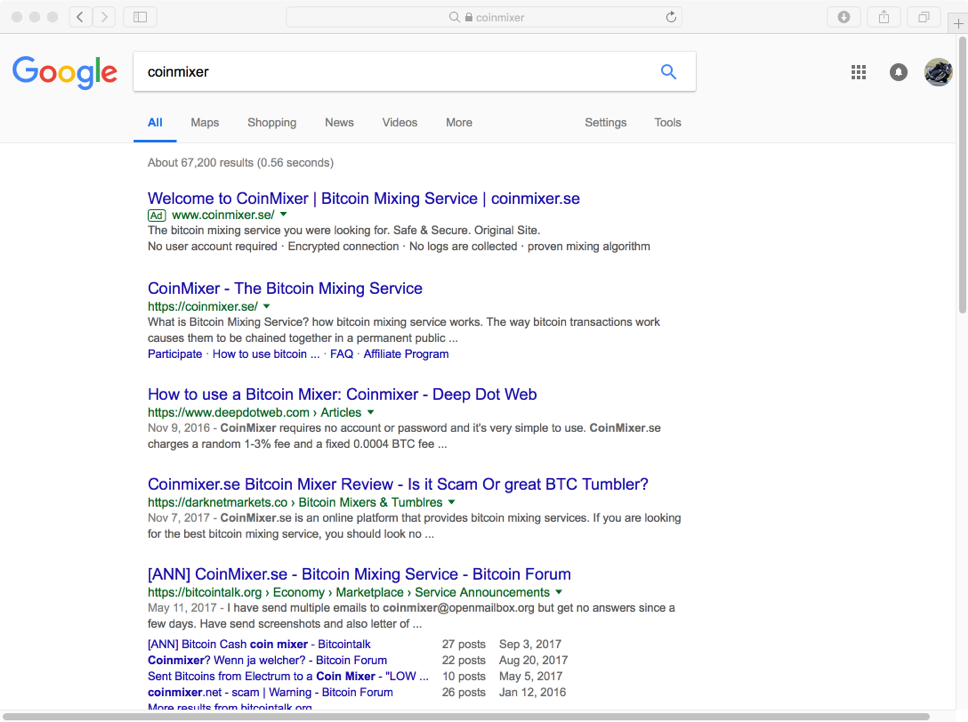 Cryptocurrency money laundering services are now trying to disassociate input funds for mixing versus the output funds sent to the criminal who wishes to receive these laundered funds. This is done through having large pools of liquidity (i.e., holding millions of dollars worth of Bitcoin or other cryptocurrencies) and keeping these pools separated. In 2016 and 2017, these funds were combined, and the mixers relied on timing and value combination scrambling to hide the flow of funds from senders and receivers.

In late 2017 and 2018, we began seeing these services paying particular attention to disassociating input pools and output pools of coins. They are doing this by collecting input funds into large pools and then depositing these funds into exchanges. Then they move the funds between exchanges and finally bring them out to an output pool. This approach reduces the transaction cost of moving the funds and creates two or more international barriers for obfuscating the input and output funds at the exchange level.