How Does Cryptocurrency Money Laundering Work

Hiding the illicit origins of these funds, aka ‘money laundering,’ has also kept pace with the times. The age of crypto is far different from the days of Al Capone, who allegedly purchased ‘Laundromats’ to mix dirty money with legitimate business proceeds and thereby obscure his organization’s illegal profits derived from prostitution and bootleg booze.

The growing theft of cryptocurrencies and their increasing use by terrorists, extortionists, identity thieves, drug dealers, weapons dealers, and human traffickers have ushered in a new era of high-tech virtual money laundering. However, unlike cash, getting this dirty crypto money clean is a little more complicated. 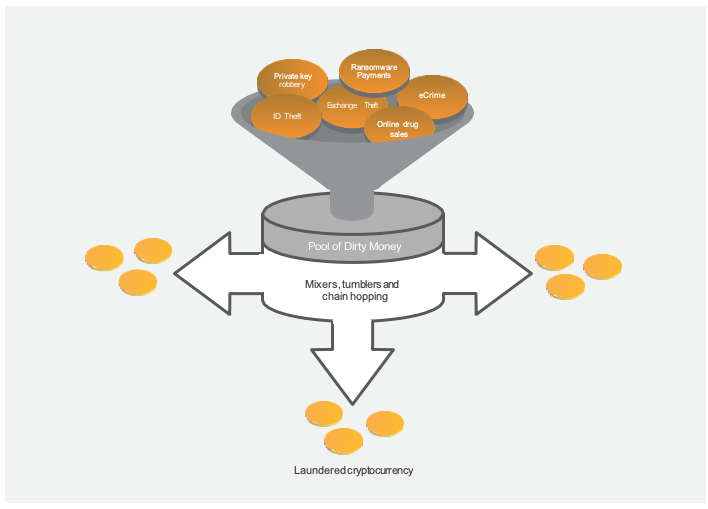 The first step in the cleansing process is called Layering. In the traditional money laundering world, this would involve purchasing expensive items like gold bars, cars, jewelry, or real estate and then reselling them. The virtual world involves moving money into the cryptocurrency system and moving it around using mixers, tumblers, and chain hopping. The more dirty crypto money goes into the systems, and the more it moves around, the harder it becomes for investigators to see through the web of action and trace a path back to the source. Additionally, the pseudo-anonymous nature of virtual currencies makes it exponentially more difficult to trace these funds than cash. As one caveat, criminals will lose a percentage off the top to move the funds, but in the end, the funds appear legitimate, making the loss worthwhile.

The next step toward clean money is Integration. After placing the funds in the cryptocurrency system and moving them around in a kind of virtual shell game, the criminals are closer to enjoying unencumbered and relatively safe use of their ill-gotten gains. There are still risks to integrating the funds into the mainstream financial system because exchanges and other parties involved in cryptocurrency transactions monitor activity and may issue Suspicious Activity Reports (SARs), which flag high-risk transactions. However, once legitimized, the criminals have multiple options for recouping the funds from the financial system.