ERC20 is a protocol standard that defines certain rules and standards for issuing tokens on Ethereum’s network.

In ‘ERC20’, ERC stands for Ethereum Request For Comments, and 20 stands for a unique ID number to distinguish this standard from others.

To put it in layman terms, if you include certain functions in the token’s smart contract, you are ERC20 compliant. If you don’t include the mandatory functions, you are not ERC20.

You can see those functions here.

So, those tokens on Ethereum’s network check all the necessary boxes, i.e., include the necessary functions in their token implementation, which are deemed ERC20 tokens.

These are crypto-assets or crypto-tokens which can be traded like Bitcoin or Ethereum, or Litecoin, but unlike these cryptocurrencies, they don’t have their dedicated blockchain. Instead, they thrive on Ethereum’s blockchain and bring several benefits for the users, which I will discuss further in this article.

Like I stated earlier, ERC 20 tokens don’t have their dedicated blockchain and thrive on Ethereum’s blockchain instead. This is the reason why, when you send ERC20 tokens, you are required to have some Ethereum as GAS.

To make it is simpler to understand, consider this example of an ERC20 token, i.e., OmiseGo Token.

If you look closely, you will find that Ether transfer is ‘0’, and it will look like zero value was transacted (see the red box ). But on closer examination, you will find 162. 4 OMG tokens were transacted between two Ethereum addresses. (See the yellow box below)

You can also see the smart contract address of OMG in the yellow box starting with ‘0xd26…’. If you go ahead and check the smart contract’s source code, you will find all the functions that an ERC-20 token should have. Here is the link. And this smart contract is like an accountant that keeps track of the total supply, distribution, etc., of an issued ERC20 token on Ethereum’s network.

Also, you can see in the image above that the transaction fee was paid in Ether, which is calculated from the GAS price and Gas limit. That is why, to transact ERC20 tokens, you should have Ether before the address from which you plan to initiate a transaction out.

Before the ERC20 token standard, different start-ups or DApps set their own standards and implementations for launching a token on Ethereum’s network.

However, with the launch of the ERC20 standard, things have changed and have become much more streamlined. Also, a standard like ERC20 has a lot of benefits:

Whereas, if you have a standard and uniformity that ERC20 brings to the table, it becomes very easy for users and exchanges to list such tokens quickly, given that the tokens follow a standard, i.e., ERC20.

This is only one practical scenario, but there can be many tokens being exchanged via smart contracts on decentralized exchanges without any third party because their underlying tech and implementation standards are the same. Whereas, if we implement a decentralized exchange of tokens that follow different rules and standards, it will become cumbersome to implement such a DEX.

Also, already as of now, more than 20,000 ERC20 tokens contracts are running on Ethereum’s blockchain. Not having a standard will bring a lot of such unseen issues. Some of the very well-known and popular tokens are shown below. 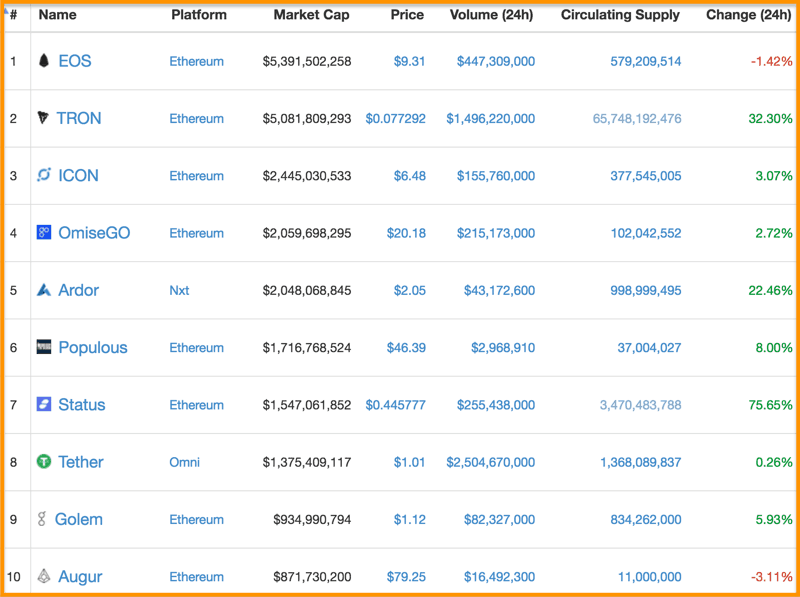