Whether performed by national agencies or local law enforcement, the ultimate objective of intelligence analysis is to develop timely inferences that can be acted upon with confidence. To this end, effective intelligence analysis consists of integrating collected information and then developing and testing hypotheses based on that information through successive iterations of additional data collection, evaluation, collation, integration and inductive reasoning. The desired end products are inferences that specify the who, what, when, where, why and how of the activity of interest and lead to appropriate actions. This process is illustrated in Figure 1 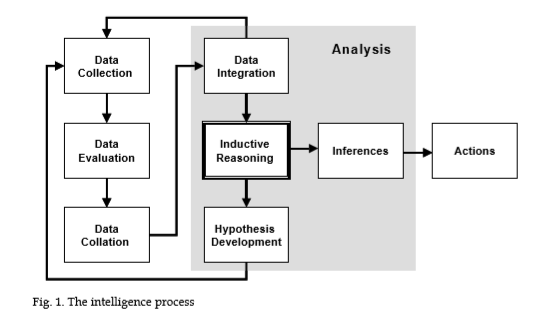 While in the last couple of decades a number of useful tools have been developed to aid in data collection, evaluation, collation and integration, analysis remains highly dependent on the cognitive capabilities, specifically the critical thinking skills, of the human analyst. For this reason, it is important to understand the inherent capabilities and limitations of the analyst and, in particular, the cognitive challenges of intelligence analysis that must be overcome through training in and application of critical thinking (Harris, 2006a, 2006b; Heuer, 1999; Moore, 2007).

Our concern with and study of critical thinking skills for intelligence analysis relates to that aspect of ergonomics research that seeks to understand how people engage in cognitive work and how to develop systems and training that best support that work. These efforts have come to be known as cognitive ergonomics or cognitive engineering. While our focus here is specifically on the domain of intelligence analysis, we recognize the many areas of endeavor that require critical thinking skills. These include the professions, business, military, education, and research and development.

Just what is critical thinking? Critical thinking was first conceived in the early 1940’s by two psychologists, Goodwin Watson and Edward Glaser. Watson and Glaser also developed the first test of the skill, the Watson-Glaser Critical Thinking Appraisal (Watson & Glaser, 1980), which is still widely used. Since then, almost all of the theoretical development has been conducted by educators and philosophers, where the focus has been on identifying people with superior critical thinking aptitudes through testing. The notion of critical thinking as a skill that can be improved through focused training, as is the view of a psychological construct, has received far less attention. However, see Halpern (1996) and Baron and Sternberg (1986) for notable exceptions.

In desiring to develop a consensus definition, the American Philosophical Association attempted to develop such a definition based on the responses of 46 experts (American Philosophical Association, 1990). The resulting definition was “purposeful, self-regulatory judgment which results in interpretation, analysis, evaluation, and inference, as well as explanation of the evidential, conceptual considerations upon which that judgment is based.” A review of the literature covering the 10 years subsequent to that exercise (Fischer & Spiker, 2000) revealed many different conceptions of critical thinking with only a modest degree of overlap. It appeared that the concept of critical thinking could not be adequately addressed by a simple verbal definition. A more comprehensive model was required to address important components and interactions, and to serve as a basis for empirical testing.