This feature allows you to have action logic to be executed across multiple agent machines all in ONE test case. When you add a new action to the Action Collection list it’ll automatically have a ‘Default’ role and what that means that if under execution you select a machine which also has ‘Default’ role specified for it (more information on specifying machine roles can be found here) then this action will execute on that agent box (more information on machine role execution can be found here). If you point an action to another ‘Machine Role’ by clicking on the Role column value that is there and changing to another one then it will get executed against that box.

In the above example the ‘Generate Database test data’ will be executed on the agent machine which has a role of ‘Server’ and the next action ‘Login to application’ will now get executed on a machine which has ‘Default’ role assigned to it. So this way in one test case interacts with both server side box as well as the client side one. In order to execute this test case you would need to check the check boxes for 2 machines under ‘Select Machines’ option in execution screen (since both of them will be used), like this:

Each machine can have a set of variable values which are unique to it and be retrieved by actions. This can be very useful in order to provide a value that is unique to this box and so actions will be able to use it in test case execution (to set variable value for a machine read here). The variable format for this is: ${ Machine.<Role>.<Variable name> } (for example: ${ Machine.Default.HostName })

In the above example our Server role box is the one that is going to be used by our client Default role box so we need to use its IP address. Since we defined it’s IP address as a variable that can be retrieved during execution (and was defined on Machine Variables level shown in screenshot bellow) we can now use it by ‘Open browser’ action to navigate to the URL of our Server from Default (aka client) side. 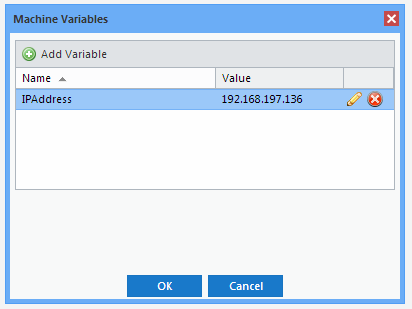