Windows 10 is a major new Windows release from Microsoft. While Windows 10 offers many benefits, it does now have the potential to be slightly more troublesome in ensuring Weatherlink compatibility. To be clear, Weatherlink (as of v6.0.3) remains fully compatible with Windows 10 but there may occasionally be issues in getting a new or recently updated version of Windows 10 to function correctly with Weatherlink. These issues can usually be fixed but will typically require a one-off adjustment to the Weatherlink installation or configuration.

If you are experiencing any Windows 10 related issues then the first troubleshooting step is to ensure that you’re definitely using the latest version of the Weatherlink program – please see the ‘Reinstalling Weatherlink’ section of the Migration and Update Problems topic for further details.

If the problem remains unresolved then please read on:

With Windows 10, Microsoft seem to have introduced a new updating strategy that could, at least in theory, impact on compatibility issues. Automatic updating of Windows has of course been the norm for all recent Windows releases but, in the main, the updates have been either relatively minor, typically security or bug-related, or well signposted as in Service Pack (SP1, SP2 etc) or e.g. v8.0, v8.1 etc releases. But with Windows 10, MS seem to have started to roll out potentially significant changes to the Windows architecture as automatic updates but without really highlighting key features or version numbers of the latest updates.

In future, it looks like it will be more necessary to be aware of the Build Number of the Windows 10 version in use and alert to the possibility that one potential cause of a new USB communication issue could in theory be a recent Windows update. There are various ways of seeing the build number, but perhaps the simplest is to open a command prompt window eg by right clicking on the Win10 Start Button and choosing the Command Prompt item. The Build Number should be displayed on the top line of the window, 10.0.10240 for instance on my PC right now, giving a build number of 10240. Another easy option is to press the Windows and ‘R’ keys together to bring up the ‘Run’ window and then type in winver and OK, which should display the Windows 10 About box.

The bottom line is that it’s no longer safe to offer a blanket assurance that Windows 10 is compatible with Weatherlink because in principle an automatic update may be released at some point that does break compatibility. And in fact, after this page was originally written, in Dec 2015 exactly this issue appeared. We don’t yet have an exact build number when this issue was introduced but it is clearly later than 10240. It is relatively minor in that it affects only the USB Xpress driver. We believe that users will be unlucky ever to see this bug nowadays provided their Windows build is fully maintained and up to date. But a couple of potential fixes are described below.

Silabs appear to have released an updated driver version (v6.7.6 dated Sept 3, 2020) that may well fix the USBXpress driver bug in certain versions of Windows 10 and which may be downloaded from: https://www.silabs.com/developers/usb-to-uart-bridge-vcp-drivers . We don’t currently have access to a version of Windows 10 that exhibits this bug and so cannot confirm the bugfix, but very probably it cures the problem. It may well also be that current builds of Windows 10 now contain the updated driver and therefore do not show the bug.

But if you’re still seeing the problem then the Rollback fix is described below.

This fix is necessary because in Dec 2015 SiLabs appear to have released a new USB Xpress driver to Microsoft for inclusion in Windows 10 update that is not working correctly. The Rollback fix reverts the USBX driver to the previous version. 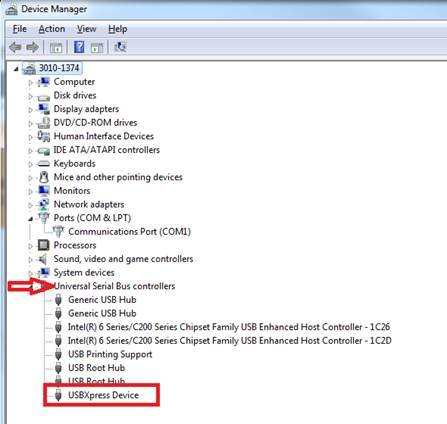 This fix can be tried by Windows 10 users seeing a ‘Communications error’ in Weatherlink when attempting to connect to the USB logger in one of two scenarios: either the connection was working correctly previously but is not now, following eg a Windows update; or the logger is being connected to a PC with a new Windows 10 installation. (NB No versions of Windows prior to v10 are affected by this specific bug)

Applying this fix is fairly straightforward but does require some knowledge of the Windows ‘Device Manager’ settings manager. As mentioned above, it’s also the case that the simplest fix is to move the logger to VCP/serial mode as described elsewhere in these notes. But for anyone keen to continue using USB mode then proceed as follows:

The first step is to confirm that the USB Xpress driver is indeed being used. This will be the case if the USB option is selected in the ‘Communications Port’ dialogue of Weatherlink, but can be confirmed by looking for a USBXpress entry in the ‘Universal Serial Bus Controllers’ section of Device Manager, as shown in the picture right. Remember that the driver entry will only show up in Device Manager when the logger is actually connected via USB to the PC.

If this USBXpress entry cannot be seen then either the USB port option has not in fact been selected in Weatherlink (i.e. maybe the serial option is actually in use) or the USB Xpress driver is not loading for some other reason – further investigation will be needed. 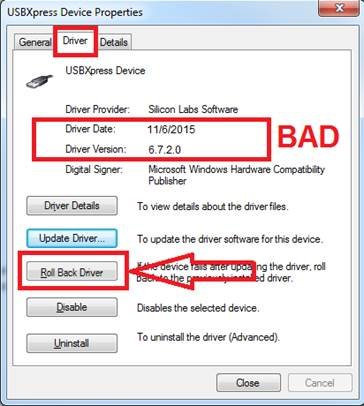 Click the Driver tab and check the driver’s date and version number. If this shows as v6.7.2.0 then this is the faulty USB Xpress driver.

The remedy is to click the ‘Roll Back Driver’ button which should cause the previous driver version to become active again. Once the version is no longer showing as v6.7.2.0 then it should be possible to connect to the logger via USB mode again. If this doesn’t happen immediately then it’s possible that the logger’s USB cable may need to be disconnected and then reconnected after a few seconds pause.

Use of the previous driver version should be retained after the PC has been rebooted, but it may be prudent to check this to be sure of reliable future operation.