The notes further below provide more detail about updating the WeatherlinkIP firmware, but key points are as follows:

!Failure to observe all these points may result in a failed update, which may be difficult to recover from.

The IP logger is different from eg Davis serial and USB loggers in that it has its own logger firmware (ie as distinct from the console firmware). Updates to the WLIP firmware are released from time to time. The current version (January 2020) is v1.1.5.

Often the updates are relatively minor and there’s not automatically a need to update just because a new version is available. But updates are sometimes important, for example as from May 2015 uploads to weatherlink.com from firmware older than v1.0.8 will stop working and, in general, it does no harm to check the Davis website for updates at regular intervals.The changelog on the Davis website (see link below) usually gives an indication of the significance of each update.

!And the turn of the year to Jan 1st 2020 revealed a critical bug in the WLIP firmware to do with how this logger handles dates. An update to firmware v1.1.5 should fix this issue and is downloadable from the Davis support site. It is important that this new firmware is installed at the earliest opportunity.

Your IP logger’s current firmware version can be found in one of three ways:

The latest firmware for the WLIP logger can always be downloaded from the support section of the Davis website and specifically from the Weatherlink section at www.davisnet.com/support/weather/downloads/software_frmwr.asp. The download is in the form of an exe file that can be run directly on Windows systems once downloaded.

*Until recently (May 2020) it has been the case that updates could be run only from a Windows PC. However a version of the v1.15 firmware update is now downloadable for Mac users from http://toolbox.davisinstruments.com/downloads/Weather/firmware/MAC/WLIPUpdater115.zip . Note that this requires Catalina or later as the Mac OS version. 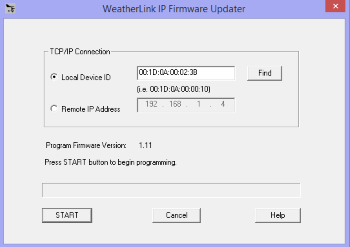 NB For those preferring to view a short video, instructions for performing the firmware update are also available on a Youtube video on the Davis channel..(NB The Davis website has changed radically in appearance since this video was made. But you should still be able to navigate to the Weather | Support section and find the firmware downloads from there.)

Running the updater displays the simple dialogue shown right. The updater runs in two stages. First, as it opens, it will automatically look for an IP logger on the local network and, if one is found, the DID and IP address will be displayed. If there are two or more local WLIP loggers then click the Find button until the particular logger of interest (as verified via its DID) is displayed. (See section below for details of updating firmware on remote networks.)

*It is strongly recommended that two precautions are taken before starting the update. First, ensure that the console is running on mains power and not on battery power alone. Second, place the console into Setup mode by pressing the Done and minus keys at the same time – this can be confirmed from the ‘Receiving from’ message in the bottom ticker line.

For the second stage, click the Start button.The Firmware Information dialogue box will appear advising you of your current Firmware version. You can choose to proceed with the update or cancel out of the firmware updater. If you do proceed then the latest firmware will download to the logger over the course of a minute or so – as with any firmware update, do not interrupt this download until it has completed. When complete you should see a dialogue message advising of a successful update. In the unlikely event that the update was not successful then it may well be worth trying a second time. (NB Once the update has started it will proceed even if the existing firmware version is identical to the ‘new’ version, but this shouldn’t be a problem – it will simply result in a new copy of the same firmware being loaded into the logger.)

The WLIP logger should then restart automatically with the new firmware now active.

Note that it is possible in principle to update firmware on a remote logger (ie one that is not connected to the local network) but the remote logger much be associated with a specific IP address, which will probably involve port forwarding (for port 22222) on the remote router. For remote updating, the Find button obviously cannot work automatically and so the logger’s remote IP address needs to be typed into the ‘Remote IP address’ options box, taking care to observe the correct syntax. In some circumstances, then pressing the Find button may be able to confirm that the remote logger can be seen, but this won’t always work. However, if at all possible, firmware updates should be performed locally – there is much more control and visibility over what’s happening and more opportunity to correct a failed update.

Provided the precautions outlined above are followed carefully when performing the firmware update, there is a high probability that the update will run successfully. But if you’re very unlucky, an attempted update may hit a snag as outlined below.

It is not that uncommon for the Find button on the updater utility to report that the WLIP unit cannot be found on the network. It is important that the console is placed in Setup mode first and to try the Find function at least 2 or 3 times before concluding that the Find function really isn’t working.

It’s also perfectly possible that the WLIP unit has been working fine and so it must have an IP address, but because of some quirk of the network configuration the updater utility cannot locate the logger automatically. In this case, it may be possible to enter the logger’s credentials into the updater dialogue manually. There are two options here:

Pressing the Start button can be tried after either of these options.

A failed firmware update of itself should not cause lasting damage to either logger or console. The first rule in recovering from a failed update is to remember that an update can be retried multiple times and it may well succeed on the 2nd or 3rd attempt. Indeed, in extremis it may well be worth trying multiple (eg 6 or 8) times before concluding that the logger or console really has suffered a more serious fault. However, it is worth trying the recovery in a structured way: