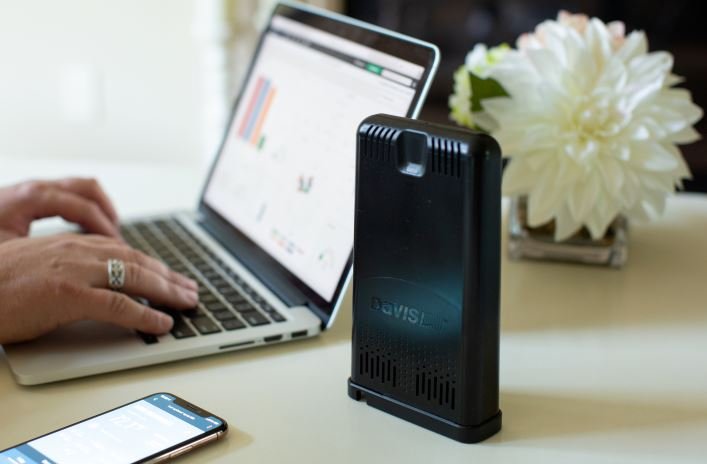 This topic covers notes on the 6100 Weatherlink Live (WLL) unit released by Davis in April 2019.

Given that WLL is a completely new product and significantly different from previous hardware units in the Davis Weatherlink range, these notes are limited as yet but will be updated as new information become available.

Because WLL is a new and rather different product from traditional Davis VP2/Vue consoles and loggers, the notes here venture beyond troublehooting and provide some extra background information on how a WLL unit can be used.

This requires a Bluetooth connection to the WLL unit from a smartphone or tablet running the Weatherlink app v2.0.16 or later. This appears to be the only method for setting up WLL since the WLL unit does not seem to expose a web interface, at least not at any easily-discoverable URL. (Of course Davis may provide more details of how to access an interface at a later date.)

The Bluetooth connection can be reactivated at any time to make basic changes to the WLL’s configuration, eg to change from WiFi to cabled Ethernet connectivity. To make the BT connection, the blue LED on the WLL may need to be flashing. If this cannot be seen then there is a sensitive area/pad in the recess above the LED – touching this with a fingertip should start the LED and allow a BT connection.

!WLL units must be AC mains-powered (or run from a suitably powerful external DC power supply). A WLL unit will accept 4xAA back-up batteries and we strongly recommend that these are fitted as part of the initial set-up,

!Note also that WLL is designed as an Internet-connected device. WLL certainly has a local API to allow purely local data handling and this function works well. But whenever a WLL unit needs to be rebooted (eg at initial installation, after an extended manis outage or, potentially, an update), the WLL unit needs to contact the weatherlink.com server eg to reset its time accurately. So WLL is not suitable for use at a remote location where no form of Internet connectivity may be available.

The backup batteries are obviously intended to cover periods of mains outage but their role is limited to backing up memory, ie to receiving and saving/queuing sensor data. The batteries do not allow the WLL unit to run normal uploads to weatherllink.com, but the uploads should start catching up once mains power is restored;

Remember that several aspects of your WLL device can be configured via the device’s weatherlink.com account and not necessarily on the device directly. So things like archive interval, calibration for the internal temperature/humidity/pressure sensors etc are all made via the Device | Device Configuration | Edit Settings option on your weatherlink.com account (that’s Edit Settings for the WLL device itself at the top of the page, not the ones for individual transmitters).

Be aware that the shortest archive interval you can set on the free (Basic) plan at weatherlink.com is 15 minutes (though longer intervals can be freely set). Archive intervals of 5 minutes or 1 minute require a Pro or Pro+ subscription respectively. (NB This point is largely moot since free plans cannot access their archive data. However, archive data is actually stored by all accounts – it’s simply not accessible to users on free accounts. If a user subsequently upgrades to a Pro plan then they should discover that they now have access to all of their past data.)

Calibration and other settings (eg rain gauge increment and annual rainfall to date for newly installed gauges) for sensors attached to individual transmitters are made via the Edit button within each transmitter’s ID box on the Device | Device Configuration page. You will often need to click through the Advanced Settings button to access all of the settings.

It should not normally be necessary to reboot the WLL unit. However, there are occasional circumstances when a reset of the WLL is required to reinitialise the unit and thereby to allow certain features to be reset or updated. Rebooting is achieved by removing mains power and also one backup battery for a few seconds before repowering. In general, rebooting should not be necessary at all unless it is specifically requested that you do so by Davis support to fix a particular issue. Rebooting will cause any data that has not been uploaded to weatherlink.com to be lost and so it should certainly not be performed if there has been any power or Internet outage until the uploads have had time to catch up fully.

Access to data generated by a WLL unit is is available via the WLL API..Further information is available under a separate data access topic.

*Remember that WLL does not generate or store traditional archive data. Summary data is available from weatherlink.com.

It appears that there is a bug in the original WLL firmware which may prevent some rainfall totals such as the 24hr total being calculated correctly. This can be cured in one of two ways:

The WLL unit’s operation is obviously controlled by software installed into the unit – firmware in other words. The firmware is designed to be upgradeable but this is done automatically from weatherlink.com and cannot be controlled by the user (or by dealers). In other words, WLL firmware is pushed from weatherlink.com. There is no known way for users to download firmware updates and to install them locally. What process at weatherlink.com controls the firmware updates is not disclosed at present. The wl.com administrator can command an update to a specific WLL device, but we understand that there is also an automatic bulk update mechanism, though how and when this operates is not clear and currently (August 2020) it does seem rather slow to perform a mass update of all installed WLL units.

Initially, it was not possible to see which firmware version or date a particular WLL unit was loaded with. But this information is now available as part of the Health Data screen on Weatherlink.com.

Interacting with WLL and finding the WLL’s IP address

Anyone wishing to experiment with accessing data from a WLL unit will probably need to ascertain the WLL’s IP address on the local network. This isn’t always trivial to do, but some approaches include:

*Weatherlink Live does not appear to have a web interface, so trying to access the WLL’s settings by typing in its local IP address in a browser won’t work.