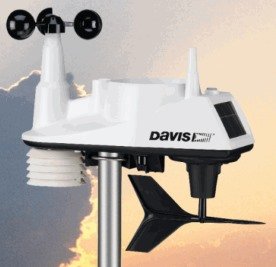 Davis Vantage Vue stations are marketed as good-quality, entry-level weather stations, but which are clearly signposted as non-expandable. The lack of options to add extra sensors to a Vue is one of the key benefits from upgrading to a Vantage Pro 2 (VP2) station over the Vue.

That said, established Vue owners still often look for ways to expand their systems without buying a complete replacement VP2 station. This topic lists a few options by which a Vue station can actually be expanded. To be clear, other than the options below there is no way of adding supplementary temperature (or humidity) or soil moisture, leaf wetness etc sensors to a Vue. These options typically involve buying some extra sensors and wireless transmitters and so inevitably there is some significant cost involved. But for anyone who is interested in Vue add-ons here are the options:

Solar and/or UV sensors cannot be added directly to a Vue installation. However, there are a few ways in which data from solar/UV sensors can be incorporated into the overall data stream from a Vue:

Switch to a VP2 Plus ISS

While solar/UV cannot be added to a Vue ISS, the Vue console can display data from solar/UV sensors. To achieve this the Vue ISS must be replaced by a VP2 Plus ISS (or standard VP2 ISS fitted with a solar sensor). A data logger fitted to the Vue console will be able to log and feed the solar/UV data just as if it were fitted to a VP2 console.

The 6100 Weatherlink Live (WLL) unit is capable of receiving data from up to eight different VP2-type wireless sensor transmitters and uploading them to the Davis weatherlink.com cloud platform. So any existing Vue ISS could be one of the eight transmitters while solar/UV sensors attached to a 6332 sensor transmitter could be a second one. Adding Weatherlink Live plus solar/UV sensors and transmitter is not a specially cheap option but once the 6100 WLL has been installed then it opens up the way to considerable further expansion, if required.

It’s worth underlining that the main way by which all data is expected to be viewed from Weatherlink Live is via the weatherlink.com web interface – any solar/UV readings will not appear on the Vue console screen. Nonetheless this is a mechanism by which solar/UV readings could be added to a Vue installation when the data is accessed via weatherlink.com. (NB There are other local data features due to be added to Weatherlink Live, but these haven’t been fully disclosed yet.)

Meteobridge Pro Red (see our main website for further details) provides data handling services that are comparable in principle to the Weatherlink Live unit above, eg 8-transmitter reception allowing a separate 6332 transmitter + solar/UV sensors to be added as outlined above. However, the data handling for this Pro Red option is fully local and substantially more flexible than WLL. The MB Pro Red unit also has the advantage of being available now.