The supercap fault/issue is a transmitter fault, primarily found on older VP2 systems (but see VP1 note below), whose commonest symptom is poor ISS/transmitter battery life. This can be as short as a few days but can also range up to several months, especially in the early stages of this fault, but well short of the typical transmitter battery life of 18 months or so. Accompanying symptoms can also include loss of wireless reception overnight only or, occasionally, complete loss of reception even with a new battery fitted.

(NB A supercap fault is not the only cause of short battery life, which can also happen as a result of a simple defective battery or forgetting to reconnect the plug from the solar panel when the SIM compartment cover has been removed or, simply, poor exposure of the solar panel. So all these possibilities are worth excluding before deciding that the supercap is at fault – the first troubleshooting step for supercap-like symptoms is always to fit a new battery and to check whether the solar panel is definitely plugged in. If you’re sure that the solar panel plug was in place, then (i) check that there are no loose connections on the solar panel itself; and (ii) unplug the solar panel for a couple of days of testing – there is a rare fault where the panel can develop low resistance and can also therefore run down the battery.)

Supercap faults have been most commonly reported for the ISS SIM board, but the supercap is fitted to all VP2 wireless transmitter boards, including supplementary stations (ie 6332/6345/6372/6382) and repeaters, as well as the ISS itself. So it is in principle possible to encounter the supercap issue on any VP2 transmitter.

The supercap (or ‘supercapacitor’ more accurately) is a prominent component on the SIM circuit board (see image below) whose role is to act as a short-term – eg overnight – store of electrical power for the wireless transmitter. The VP transmitter boards actually have three distinct sources of power: the solar panel, the supercap and the lithium battery. The battery is non-rechargeable and so any surplus power from the solar panel during daylight hours is used to charge up the supercap, which then acts as the first reserve of power for the transmitter overnight. Only when the supercap is depleted does the circuit switch to use the battery as a power source.

The supercap is, in one sense, nothing more than a standard capacitor in that it simply stores electrical charge. What’s ‘super’ about it is that, as a fairly high-tech component, it manages to cram what traditionally would be a huge capacitance into a relatively small component. Older users with some knowledge of electronics might be surprised to learn that the supercap used in the VP2 systems has a rating of 10F (that’s Farads, not micro- or milli-, but whole Farads), which is of course how it manages to power the VP2 transmitter unaided for a period of a few hours.

It’s not clear exactly what goes wrong when the supercap starts to fail, but it appears that a low resistance path to DC current develops across the supercap and this is able to discharge the lithium battery leading to short battery life. The fault seems to be progressive, ie steadily worsening over time and giving ever shorter battery life.

Incidence of the VP2 supercap fault

The cause of the problem is not that supercaps are inherently short-lived – they should have a useful life of 10-20 years – but that they are less robust to mechanical handling than most traditional components. In particular, they seem very sensitive to undue leverage on the supercap leads, which can cause the beginnings of internal damage. What seems to have happened is that the stuffing (to use a technical term!) of the wireless SIM circuit boards during manufacture – which would presumably have been done by a contractor and not directly by Davis – did not take sufficient account of the particular need for care in handling the supercaps and some latent damage may have been caused.

One of the quirks of the supercap fault is that the fault only progresses and starts to have noticeable effects after the board has been in use for some time – often as long as 1-2 years, sometimes longer still. There is no way that standard production testing would have revealed anything wrong with the boards. So it was only in 2007/8 that people became more aware of the supercap as an issue, despite the fact that the seeds of the fault were typically sown during early 2005.

Once Davis became aware of the issue, steps were taken progressively to modify the board assembly process in various ways over the next several months, including, most recently, glueing the supercap to the circuit board to minimise the possibility of any vibration damage. So VP2 stations made from later 2006 on, and especially those made after July/August 2007, should be much less likely to develop this fault, although it’s obviously impossible to rule that the very occasional VP2 station of any age could suffer a supercap failure. But because of the long incubation period, it’s likely that unmodified stations of 2005-6 vintage will continue to present with new instances of the supercap fault. 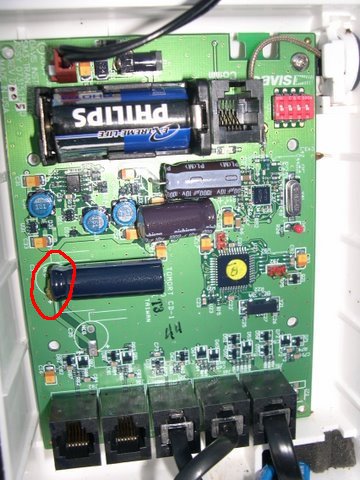 If you suspect a supercap fault based on the symptoms described above, then you will probably be able to make a definitive diagnosis by a careful visual inspection of the transmitter’s SIM circuit board. To do this, you will need to remove the inner cover from the circuit board – this is the cover held in place by 4 screws and with the device details printed on the label on the cover. Removing the 4 screws will allow the board to become loose, but it should still be retained in situ by the wireless antenna. Look closely at the area outlined in red on the image to right. This long cylindrical component (black in this image but exact colour may vary) to the right of this area is the supercap.

Inspect the supercap leads – these should look clean and bright and untarnished. But if you can see some exudate (gunky, sometimes crystalline-looking material) apparently oozing from the supercap body out on to one of the leads (usually the anode in fact) then this is a clear sign that the supercap is in trouble. See the second image below for a close-up of how a faulty supercap can appear, though the signs aren’t always quite as clear-cut as this. 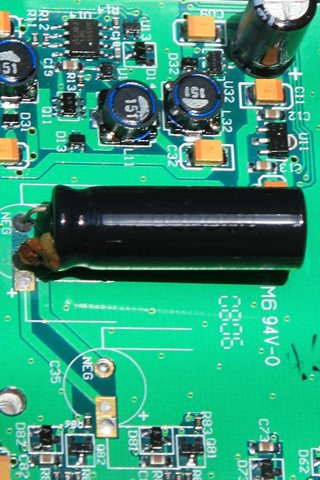 The supercap fault is one of the few component-level issues on a VP2 system that it’s possible to correct simply by replacing the offending component. It is a repair that it’s also possible to do yourself, assuming that you have some experience of working with circuit boards and appropriate soldering skills. There are two key points to be aware of:
The necessary 10F supercap replacement is not widely available and you might have trouble tracking it down from most electronics suppliers. However, it is an official Davis spare part (7370.093) and might also be available from certain specialist suppliers. We can supply the part in Europe – contact us for details;
You need to be especially careful when handling the supercap. In particular, never bend the leads from the point at which they join the supercap body. Instead, make bends in the leads away from the supercap body and using two sets of miniature pliers – one holding the lead between the bend and the supercap body and the other holding the free end of the lead and used to actually make the bend. Failure to observe this precaution will cause the same cycle of latent damage to the supercap followed by progressive failure over time that led to the original problem with the supercap in the first place;