A quick addition, based on a request from one of our users (thanks Charles!):

A new system variable called {TOPIC-TITLE} is now available, holding the title of the current topic.

Super useful if you want to include the title of your topic somewhere in your topic’s content, without duplicating the actual title text.

The Textile renderer was already replacing single quotes, apostrophes and double quotes in Topic Body text with “smart quotes”, also called curly quotes.
However, one of our customers reported that Manula was not doing the same in Topic Titles, which is of course not consistent.

Today we fixed that, as shown in the following screen shots:

The quotes as seen in the editor:

The quotes the way they are now shown in live manuals:

Thanks for reporting this, David Brown!

When using double quotes (“..”) in the Topic Title, the Title would be cut off after saving. 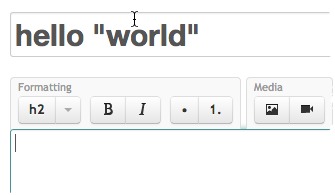 A small fix to an annoying issue in the Manual Editor:

Using the TAB key while in the Topic Title box now nicely tabs to the Topic Body box.