Once the user has opened up a Word document, tags must be added in order for information from a process or object to appear in the document being generated. The syntax used to include the tags can be found at https://docxtemplater.com/. This section will explain how to use the syntax with the appropriate tags.

Where Does the Information Come From?

When an user generates a document the tags in the Word document are replaced with information coming from the EPC.

For example, if the user wishes to include the version of the process, the tag {version} must be inserted into the Word document. When the SOP is generated, the EPC will find the {version} tag and replace it with the appropriate version number.

The data is structured in a specific manner. The proper syntax and logic must be used to ensure the right output. See below for the general data structure. 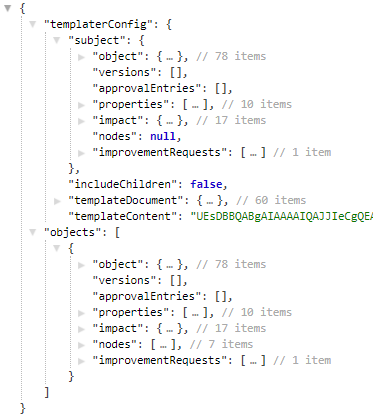 The last 7 elements (object, versions, approvalEntries, properties, impact, nodes, improvementRequests) constitute an EPC object. For example, if a document is being generated on a process:

Which EPC objects is included where will be based on the context of the document generation. The table below explains which object(s) will be included under templaterConfig/subject and objects

To display information, the name of the object from which we want the information from must be specified. Referring to to the block of code above, if we want the name of the role associated to a process, we have to specify from which object it is coming from. However, that object can also belong to another object at a higher level, which also must be specified. In the example below, we specify from the top level object down to the object property we want printed.