Welcome to the InspectX User Guide
InspectX on a Mac

InspectX requires a computer running Microsoft Windows 7 Pro or later, preferably Windows 10 on a touchscreen device on any Intel-based processor.

*NOTE: computers running the latest ARM-64 processors are not yet confirmed to support the required components to run InspectX.

Once installed and running on your Windows computer, InspectX can be accessed and operated from any other device (Android/IOS/Mac/Desktop) as long as it is connected to the same network. See Networking for more info. 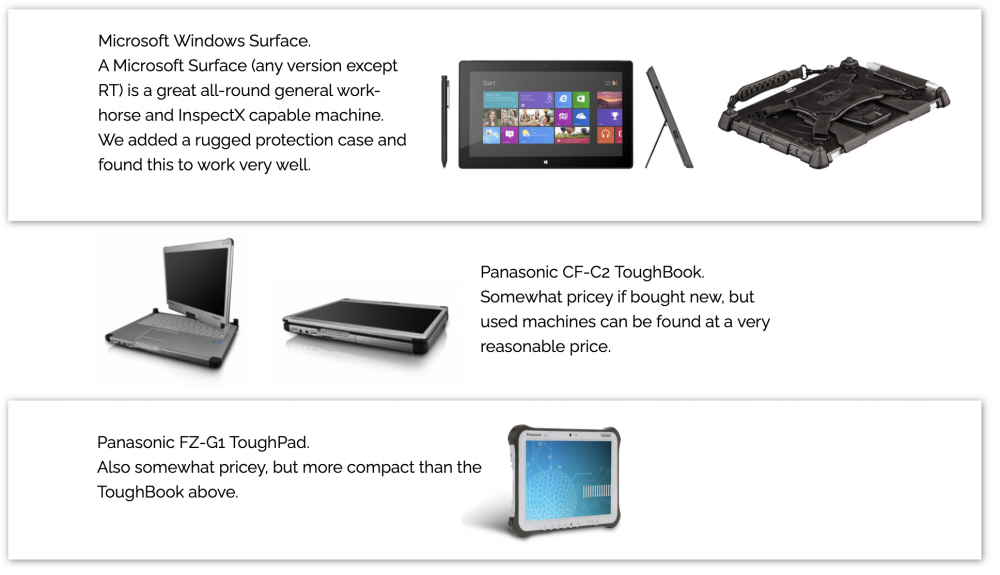 InspectX can work on a Mac running virtual Windows, but since the software is aimed toward eventually completing the report in the field I would recommend starting out with a computer that is capable of that end-goal.

We have had the most success with the Panasonic ToughBook CF-C2 which you can be found refurbished on eBay for $300 – $500.

They may look a little dated but this is still a recent model with all the capability of a modern computer and the added benefits of being semi-rugged, having a built in hand-strap for working and typing on the screen, long-lasting hot-swappable battery, sunlight readable screen, etc. Take a look on eBay and see if this interests you. I typically search for “Panasonic CF-C2 SSD” because my other preference is a solid state hard drive with no spinning components when working in the field. The only other thing I would recommend is one that already has Windows 10. Our software will run on older versions of Windows of course, but the on-screen keyboard in Windows 10 is far superior to that of earlier versions.

When selecting a computer I recommend paying close attention to machines with long battery life (preferably hot-swappable). For screen size I would recommend 10” or greater. While you can use any sized screen, we found anything smaller than 10” to be somewhat of a strain for long periods of time. InspectX will run on older versions on Windows but we recommend running Windows 8 or newer since the newer Windows on-screen keyboard is a vast improvement over previous versions.

Welcome to the InspectX User Guide
InspectX on a Mac