Multicontroller combines many of the ways that Hippotizer interfaces with the world around it into one component.
Multicontroller supports Midi, OSC, TCP, and ArtNet as well as myriad Automation protocols.
The component can also directly control select devices such as BlackMagic Videohubs or Lightware Matrix’s. 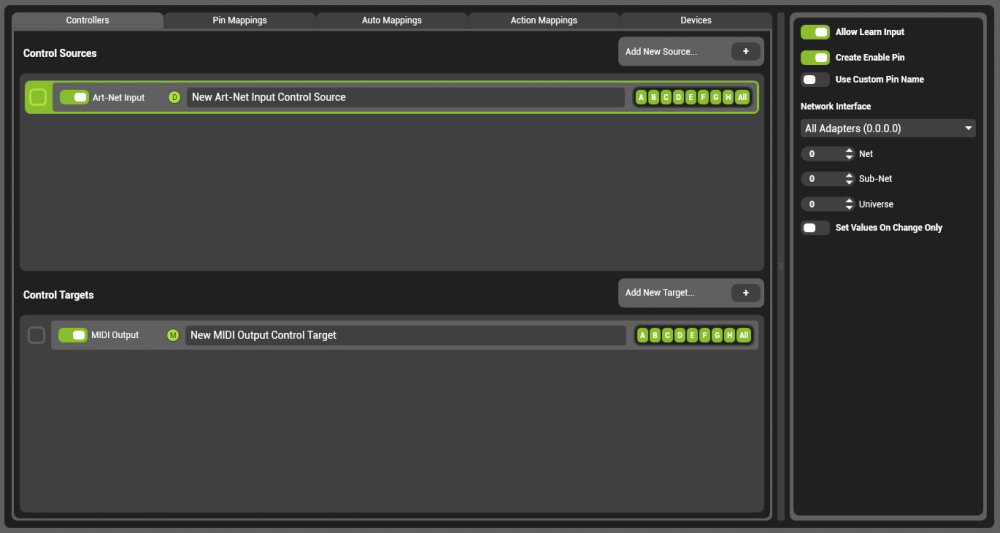 Multicontroller is made up of five sections represented as tabs in the interface:

Define the inputs and outputs of Multicontroller. Whether a TCP port or a MIDI device, each controller is added as a separate item in this menu.

Specify individual pins in Hippotizer to send or receive data.

For example: Set layer 1’s level fader to respond to a MIDI controller with a Midi Mapping.

Specify whole groups of pins to send of receive data.

For example: Set Mix 1, Layers 1 thru 8 to listen to OSC information with a Text Mapping.

Some pins are not easily mapped such as preset select or Timeline controls. Action Mappings allow for these functions to be controlled simply. Frequently, Action Mappings are used to create a trigger that is then controlled from a Timeline, DMX or within a the Zookeeper interface directly.

For example: Create a trigger pin to play Timeline 2, Cue 10.

Similar to a personality, Devices are pre-built profiles to communicate with specific third party equipment. Devices must be created by Green Hippo. To request a new device to be added please contact us.

Adding a device creates a series of pins to control the functions of that device. These pins can then be controlled from DMX, a Timeline or within Multicontroller.

For example: Create a Black Magic video hub to create pins controlling the input and output patch of the video hub.