So what are these markers good for?
For Music Editors this will be handy to mark when a songs tempo changes or mood changes.
or maybe a Sound Designer that wants to mark their favorite whoosh out of 10 to identify it fast next time you play this audio file.

The top three are stored/recalled from the CUE chunk within the files metadata.
This chunk is often used by programs such as Wavelab and SoundForge

CUE MARKER (Orange)
Cue markers (or generic markers) are a single marker designed to mark a position or to add a quick comment to a file.
To add a single CUE Marker at the playhead position press M. This can be done while playback occurs and inserts markers “on-the-fly” while reviewing.
You can also manually set the playhead at the desired position without triggering playback by holding CTRL while clicking the playhead.
To quickly insert a marker at a specific position hold CTRL + SHIFT + Click where you want to place a marker.

REGION MARKER (Purple)
Region Markers are designed to mark a selection of a waveform for playback with a start and end position. This is designed to play a single time and for the purpose of highlighting a section in a larger file.
To create a Region Marker, hold SHIFT and click-drag to select a portion of the waveform to create a yellow range and press M. This will create a Region Marker since a range was selected at the time.
If you have set the waveform option to “disable waveform zoom” you do not need to hold Shift to select a range.

LOOP MARKER (Blue)
Loop markers are designed to set a loopable region within a sound file. Many DAWs will support the use of loop regions for sustained playback.
This sets a start and end marker for a selected range and will loop playback when triggered within basehead.
To create a Loop marker, hold SHIFT and click-drag to select a portion of the waveform to create a yellow range and press. Press CTRL + M to insert a loop marker at the selected range.

SYNC POINT (Yellow)
Sync Point markers are the only marker type that is not written to the CUE chunk but instead is written to the iXML data in the files metadata as “AudioSyncPoint”.
This marker type is designed to set a synchronisation point when spotting files to a track and was initially used by Cubase/Nuendo but is now also supported by other applications such as Pro Tools and (soon) Reaper. These points will transfer to these DAW’s via DnD or “S”.
To insert a Sync Point, hold ALT (pc) / COMMAND (mac) + Click in the waveform

All markers once set can be dragged to new locations or deleted by hovering the mouse over them
and an orange “X” will appear to allow you to remove them if you click it. 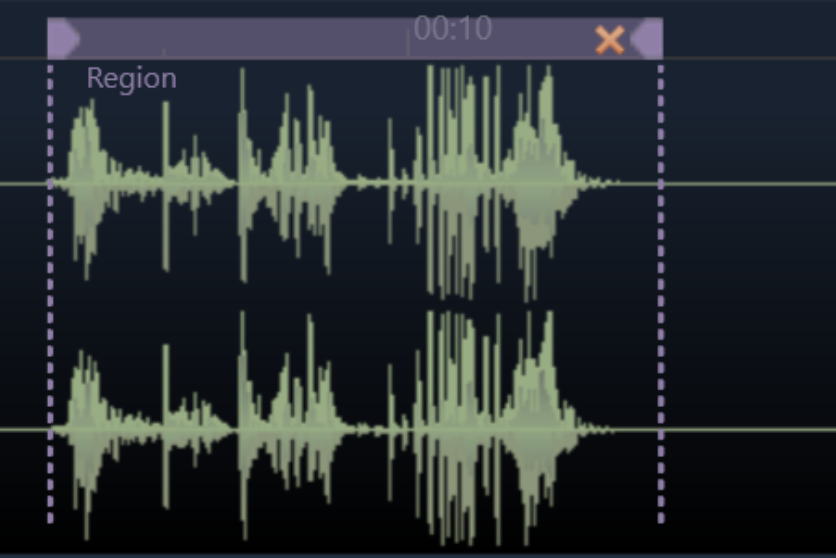 You can also delete them in the Marker Panel also using the *DEL” key.
Double clicking the name in this panel also will allow you to rename them. 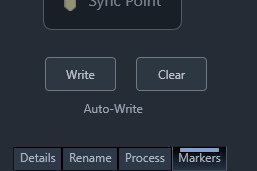 Some markers like the Sync Point write immediately into the file and same with the Purple Region when set from the Waveform using the “M” key
BUT all other markers are written based on the “Auto Write” marker option:

Auto Write Enabled
Will auto write markers to the file as changes happen. This will ensure all changes are saved as they occur but
there is no undo feature and this can cause some slowdown in editing markers as each change is saved on the fly.

Auto Write Disabled
Changes to markers on-screen are only visual and are not saved to the file until you press the Write button.
This allows improved marker editing in a file and will save you from accidentally changing markers but you must
remember to click the Write button or your changes will not be saved.

You can click the Clear button to clear all markers from the file, auto-write setting applies to this operation too.

Marker Panel Overview
Demonstrates the use of markers and regions and how to manage these and write to the files.

What about old aXML regions I created with “M” before or Injector created?
These will be converted replaced with the new style if you edit the markers in the file in anyway to the new format.

I seem to have an old aXML region playing, but I do see it
Some older rogue markers might be in the file. Press “Ctrl+M” to wipe it out.

How do I disable showing these markers if I need to?
the Waveform Settings panel has a new option named “Disable Markers” which will hide markers in the waveform but still display a list of these for reference.

Need more help with this?
Having Issues? Click to Troubleshoot or Create a Support Ticket.