This effect blurs the image in a specific, user-defined direction.

A simple blur which blends each pixel with the pixels surrounding it on all sides, to a radius defined by the user.

Examines each pixel of your image and creates a map which accentuates the areas of contrast. Detail is removed from areas of low contrast, and enhanced at contrasting edges.

Sharpening is a common application for highpass filtering. To create the sharpening, a duplicate of the layer is created, a highpass filter is applied to the duplicate, and the result is then blended back onto the original. All of this is handled internally by the Highpass Sharpening effect, greatly simplifying the process.

Adding grain to your images can be useful for a variety of purposes, including matching existing grain in other elements of a composite, artificially aging an image, or artistic purposes. Grain is similar to noise, but more organic in nature. In general, grain is a property of film stock in traditional photography, in contrast to noise, which is created by digital cameras. 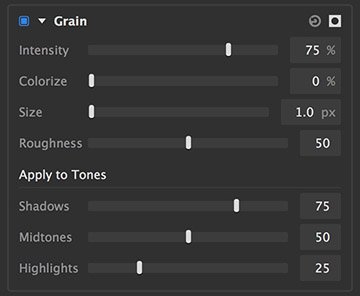 This effect works by blurring the image outward from a specified center point. It creates a similar effect to quickly extending a zoom lens during an exposure.