The table shown to the right reports the average, maximum, and minimum workplane illuminances, a maximum to minimum ratio and the calculated Lighting Power Density [W/area] (LPD) for each zone and for the overall space. 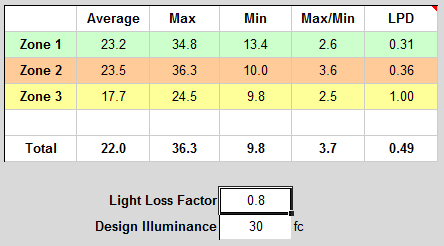 Note the LPD calculation is only valid if the IES files used contain accurate power use information. Also note that the LPD calculation for each zone uses the grid points determined to be attributed to each zone to determine the areas associated with that zone. These LPDs are rarely as accurate as the entire room LPD which uses the actually room area rather than some subdivision of it. The Max/Min ratios represent the percent difference between the highest and lowest illuminance in the data set. 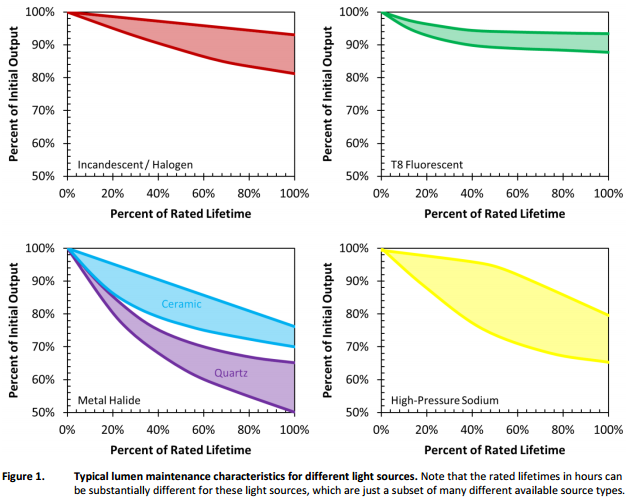 The Light Loss Factor is used to define an average fixture light output efficiency accounting for light reducing conditions such as dirt buildup and lamp lumen depreciation. This maintained light output is used for the analysis portion of SPOT. Charts of typical light loss factors for various lamp types are shown to the left. By considering your relamping and maintenance cycles, these charts can be used to determine an appropriate Light Loss Factor for the input luminaires. If a mix of lamp types were used, this should be a weighted average of those types. In general, a LLF of 0.9 is appropriate for incandescent, halogen and fluorescent sources. A LLF of 0.75-0.8 is more appropriate for a ceramic metal halide or high pressure sodium system. The LLF for new LED systems can vary widely and depend heavily on the luminaire temperature and on the relamping cycle as they rarely burn out, as seen in the chart to the right. 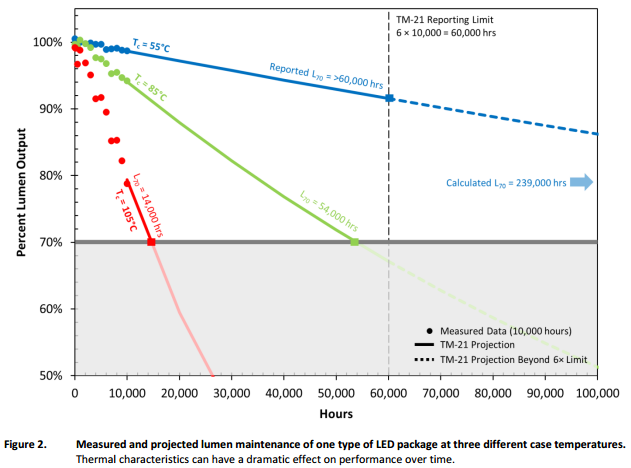 The plot shown below is located to the right of the table and displays the detailed point-by-point workplane illuminance. In electric lighting mode, SPOT automatically determines the workplane points that correspond to each luminaire zone, which is indicated by the color-coding seen on the plot. 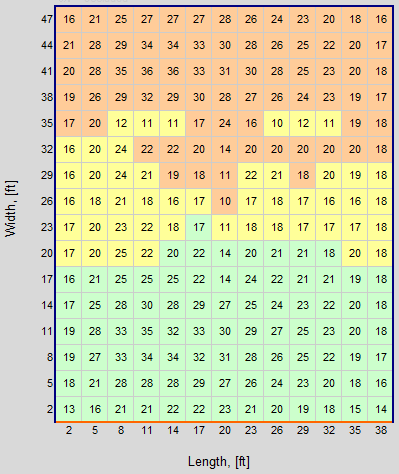 The workplane zoning corresponds to the luminaire zoning provided and is determined by which luminaire zone provides the highest illuminance to each point. This method provides the most accurate zoning information. For example, if a point falls below design illuminance and is of concern, then it should signal to the zone which has the greatest impact on that point as the zone to be adjusted. The user should not be alarmed if the automatic zoning calculation returns zones with jagged boundaries. This happens when a row or set of points straddles between two luminaire zones, both of which contribute equally. This will also lead to varying LPD numbers for the different zones. Any grid points that fall within a block will automatically be greyed out and excluded from the analysis.

A 3-D contour plot located below the table displays the same electric lighting workplane illuminance information and illustrates the general distribution of electric light in the room.