The photosensor definition table on the bottom left of the screen defines photosensor scenarios for further analysis. 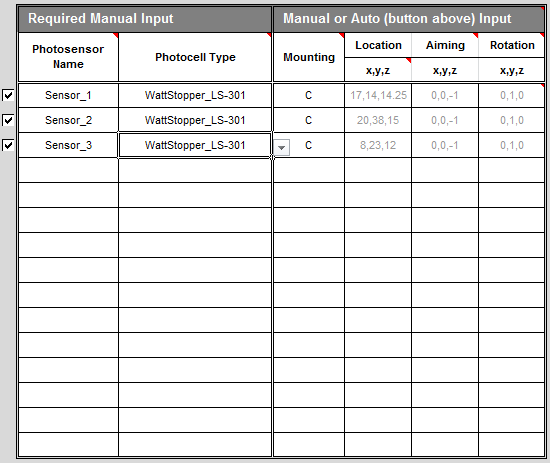 The photosensor scenarios listed in the table are shown graphically on the 3-D isometric of the space in the upper left corner and on a reflected ceiling plan in the upper right corner. One photocell must exist for each electric lighting zone but more can be added for further testing in the analysis portion of the program. To add a photosensor, simply type the name and mounting information into the next blank row in the table. To remove a photosensor, delete all the photosensor information from the row. Blank rows in the middle of this table are acceptable and will be removed upon going to the next screen. The inputs for each column in the Photosensor definition table are as follows:

Photocell Type – This field is specified with a pull-down menu showing the current list of defined photocell types. SPOT contains a library of the following generic and measured photocell types: 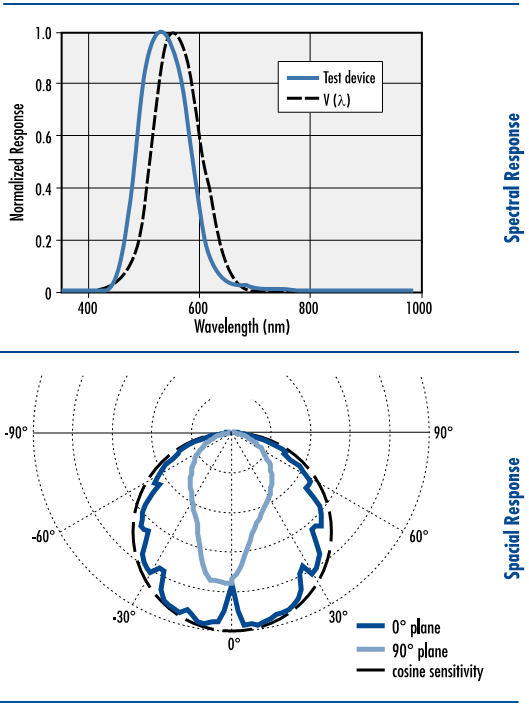 Mounting – This field sets the general mounting location for the photosensor. The user can choose from a list of mounting locations. Some photocell types only allow for closed loop (interior) scenarios. In these cases, only ceiling and free mounting options will be available in the drop down list. The following mounting locations are allowed:

Photocell Position Vectors – The three adjacent position fields define the location, aiming and rotation of the sensor for the current treatment zone using vector notation. The X values for each vector (1st number) represent the E-W dimension of the space. The Y values (2nd number) represent the N-S dimension of the space. The Z values represent the height component. The vectors must be entered with a comma separating the X, Y, Z values. The vectors do not have to be unitized. In the Reflected Ceiling Plan diagram, the photocells will be represented by three symbols (

Photocell Location – The location vector gives mounting coordinates. The user will have to ensure the sensor does not get placed within a wall, overhang, or lightshelf element as this will result in inaccurate results.

Photocell Aiming – The aiming of the sensor gives the direction in which the photocell is looking. The default is down for ceiling mounted sensors.

Photocell Rotation – The rotation of the sensor indicates the direction in which the prominent sensor housing feature will face. The default is local building north for ceiling mounted sensors.