This screen displays the available Luminaire Libraries in the three pull-down menus and lists the luminaires currently in the project in the box below the pull-down menus. 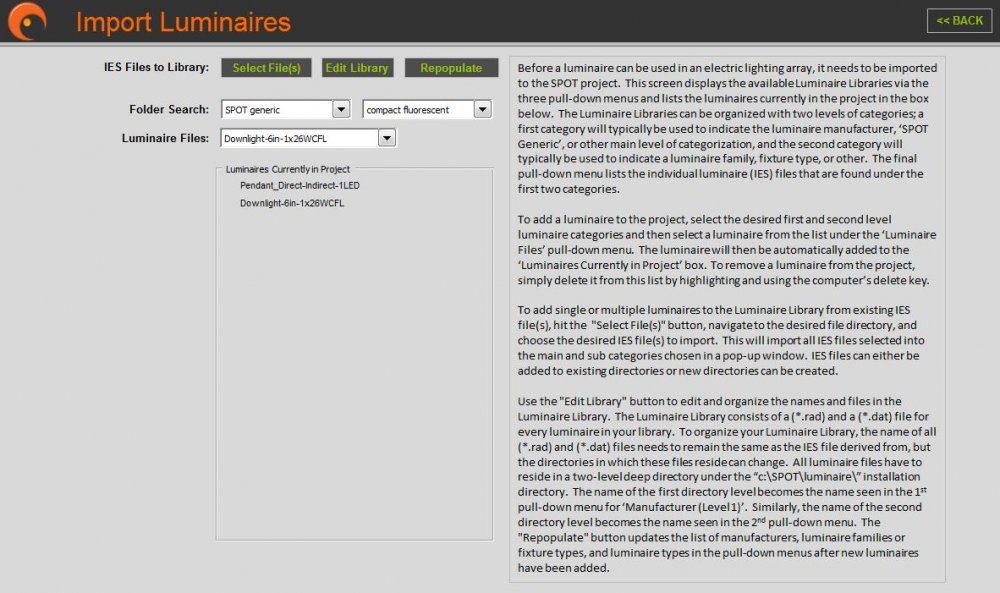 The Luminaire Libraries can be organized with two levels of distinction using the Folder Search pull-down menus. The first category of distinction will typically be used to indicate the luminaire manufacturer, ‘SPOT Generic’, or other main level of categorization. The second category will typically be used to indicate a luminaire family, fixture type, or other. The final Luminaire Files pull-down menu lists the individual luminaires that are found under the first two categories.

To remove a luminaire from the project, simply delete it from this list by highlighting and using the computer’s Delete or Back Space key.

To add single or multiple luminaires to the Luminaire Library from an IES file, hit the Select File(s) button, navigate to the desired file directory, and choose the desired IES file or files to import.

This will import all IES files selected into the main and sub categories chosen in the pop-up window shown to the right. IES files can either be added to existing directories or new directories can be created. 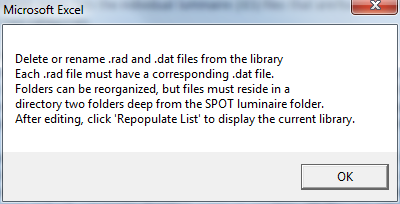 To organize your Luminaire Library, the name of all (.rad) and (.dat) files needs to remain the same as the IES file they were derived from, but the directories in which these files reside can change. All luminaire files have to reside in a two-level deep directory under the “c:\SPOT\luminaire\” installation directory. The name of the first directory level becomes the name seen in the 1st pull-down menu for ‘Manufacturer (Level 1)’. Similarly, the name of the second directory level becomes the name seen in the 2nd pull-down menu. The Repopulate button updates the list of manufacturers, luminaire families or fixture types, and luminaire types in the pull-down menus after new luminaires have been added.