The Electric Lighting screen, shown below, allows the user to select or import luminaires (lighting fixtures) and create layouts for up to 4 luminaire zones. The user can select a luminaire from the SPOT fixture library, or add a new

luminaire by importing a new IES file. This is a standard file format defined by the Illumination Engineering Society of North America (IESNA) that describes the distribution of light leaving a luminaire.

The Reflected Ceiling Plan view is updated in real-time and provides visual feedback for the defined luminaire zoning. Each luminaire zone represents a set of luminaires that are controlled together. Luminaires are often grouped together relative to daylight availability and for user controllability. Luminaire zones may also be defined with physical or electrical constraints in mind. For example, in reality a row of connected fixtures is easiest controlled together rather than being split into two or more different luminaire zones. If, upon receiving the annual daylighting illuminance results, the user feels the luminaires should be rezoned and it is deemed reasonable from a physical and electrical standpoint, this screen can be revisited and updated.

The Add button activates the Import Luminaires screen which allows the user to select a luminaire from a generic SPOT library or import .IES files to create personal libraries.

The Electric Lighting Layout section allows the user to add electric lighting to the model and assign them to up to 4 control zones. While the interactive reflected ceiling plan to the right displays the current electric lighting layout and zoning.

At any time while defining the electric lighting, the Run Interactive View button can be used to display a quick interactive nighttime rendering of the current model in a viewing program called “rvu”. This is helpful to ensure the electric lighting has been modeled as intended. The image starts very crude and pixelated, but continually refines its resolution until a recognizable image is obtained, see rendering to the left. 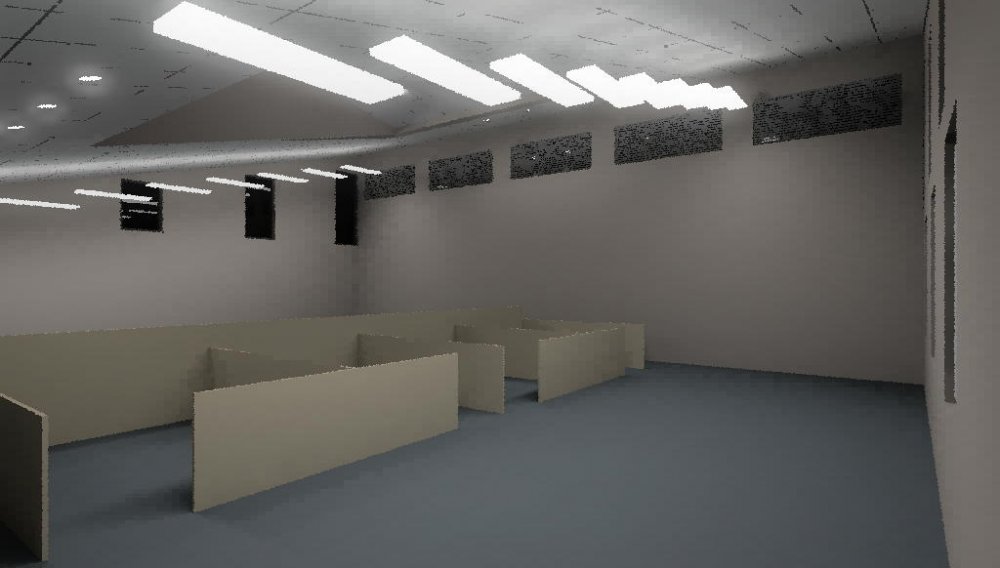 From this interactive viewer, any number of other Radiance views can be defined and implemented behind the scenes. A copy of the Radiance documentation for “rvu” is available here.

The Back button will take you back to the geometry input page. If electric lighting information has been defined, then the Next button on the Daylighting Input page will initiate the electric lighting calculations as described above.