This section includes buttons responsible for launching windows with graphs of numbers and the * “Global” * button, which opens the window with global functions – (working for all numbers).

*Automatic arrangement of groups, series and numbers windows has been described and presented in the instructional video in thread no. 10 – Preparing the platform for work. 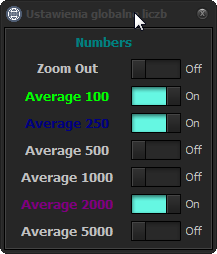 *From version 1.0.3.2 there is a keyboard shortcut “F2” that activates the “Zoom” function on the charts of numbers, groups and series.

!It must be remembered that the global activation or deactivation of average lines does not deactivate the “AAL” function on the numbers on which this function is active. The global switching of averages on and off also has no effect on automatic strategies based on the mean line such as: