Task Folders are a way to classify and organize tasks.

Folders are separated into 2 groups: user folders and role folders. A resource refers to the user, while a role refers to a job title associated with an user. The DBP allows for roles to be linked to resources. Applications within the DBP can be designed set up so that tasks are sent to resources (meaning the user) or to roles. 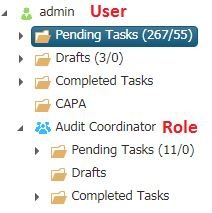 There are 3 default folders:

Tasks that have been not yet opened and addressed

Tasks that have been completed