The Foundry’s Camera Tracker for HitFilm allows anyone to easily and quickly composite effects or other elements into video footage that was filmed with a moving camera. While making the basic process incredibly simple, Camera Tracker also includes powerful features that ensure high quality results even with difficult to track files. 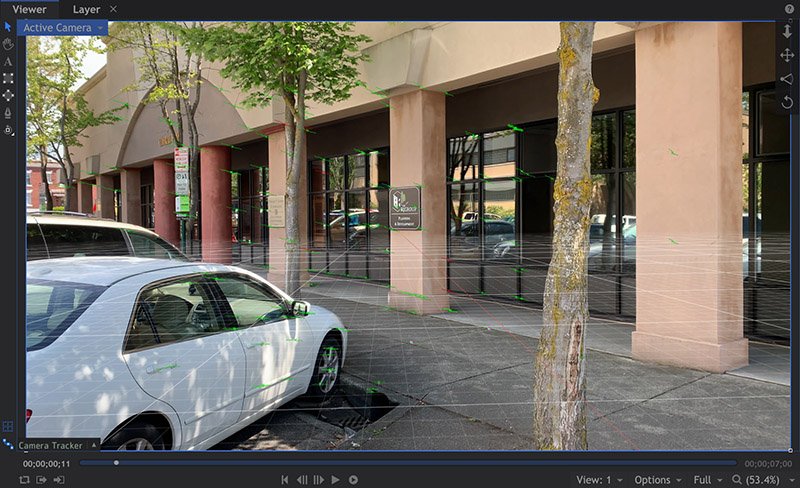 Camera tracking, also called matchmoving, is usually among the first steps in the post-production process, because compositing elements into a scene convincingly relies on the camera tracking data. The basic workflow can be broken into three main steps:

The basic process of using Camera Tracker to create a 3D camera solve is shown in this video, or you can follow the steps detailed below.

This simple process creates a scene containing your video and a matchmoved camera, ready to add new elements.

For many situations, the basic steps above are all that will be required. But frequently the tracking results can be improved by customizing the settings used to track the scene. By getting familiar with these features and settings, you can get the best results possible for any scene you are working on.

Mattes block specific areas of the video from being used in tracking. This helps reduce processing time, and prevent unusable tracking data. By keyframing mattes to cover areas of the frame containing moving objects, you allow Camera Tracker to ignore those areas, so it can focus on tracking stable objects that will give superior results.

Mattes must be created on a separate layer. In most cases a plane works best, but other layer types can work as well. Use the following steps to create a basic matte.

You can now proceed with the tracking, and the areas inside the matte will be ignored.