Every layer on the timeline shares some common controls.

Layers on the timeline can be expanded to reveal more details using the arrow icon. Each layer contains sub-groups so that you can quickly find the details you need. Tracks, masks, effects and transform data are all grouped separately.

Some layers will have additional groups. For example, 3D layers include a Material group for adjusting their 3D lighting behavior.

See Animating with Keyframes for more information about changing settings over time.

All layers have a layer properties group. The specific options available will vary depending on the type of layer. Common options include:

Once you’ve created more than one layer you can reorder them be dragging them up and down in the layer list (on the left side of the timeline).

You can move multiple layers at the same time by Ctrl or Shift clicking them.

The Select tool enables trimming and moving of layers.

To move a layer backwards or forwards in time drag its colored duration bar on the timeline.

Dragging on the start or end of a layer will trim its duration. When a layer is trimmed you can see a dimmed representation of the layer’s original duration.

The Slice tool is used to cut layers into two separate layers. The layer will be sliced at the frame where you click.

Retiming can be used to speed up or slow down playback for specific layers. Using the Rate Stretch tool to change a layer’s in or out point will retain the contents of the layer and change its playback speed to fit into the newly defined space on the timeline.

For example, dragging the out point of a layer so that the layer on the timeline is twice as long will cause the layer to playback at half speed.

You can also use the Speed/Duration option in any layer’s menu to perform a more accurate speed adjustment. This displays the Edit speed/duration window: 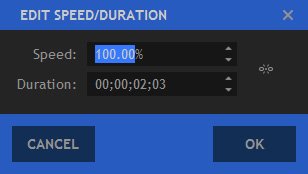 The two properties, speed and duration, can be linked or separated using the chain icon at the right. The behavior is subtly different depending on the link state.

When the two properties are linked together, changing the speed will also automatically update the duration, moving the out point of the layer to accommodate the same contents at the new speed. For example, a 2 second layer on the timeline when changed to 50% speed will have a new duration of 4 seconds. Alternatively, you can change the duration and the speed will be automatically changed to fit the layer’s contents perfectly into the new duration.

The Snap button can be used to turn snapping on and off. Snapping ensures that layers connect directly with no blank frames in-between.

Layers snap to other clips and to the playhead.

You can also jump the playhead to the start or end of layers using the Page Up and Page Down keys.

Any layer can be made visible or invisible at any time using the visibility icon.

Turning a layer invisible does not affect its properties.

When set to 2D, the content of the layer works in full 3D (for example, you can orbit a camera around a 3D object), but the rendered result of the layer is a 2D element. Therefore the 3D layer’s interactions with other layers on the timeline is determined solely by its position in the layer stack (Z-depth is not a factor).

3D plane takes the 2D version and renders it as a 3D plane inside the 3D space. In the case of videos, images and planes this is like having a flat piece of card. With 3D objects and particle simulations it is like looking through a window onto a 3D scene. The 3D plane exists in 3D space, so its interactions are determined by its position in 3D space. In the case of 3D objects and particle simulations note that it is the flat 3D plane which exists in 3D space, not the plane’s contents.

3D unrolled renders 3D content directly into the 3D space. Multiple 3D unrolled layers will accurately interact with each other in 3D space. This is the unified 3D space and enables powerful interactions – for example, you can position a green screened actor directly inside the cockpit of a 3D model helicopter, without needing any layering tricks.

The menu at the right of the layer list is for parenting layers together. The menu shows a list of all the layers in the current composite shot and you can choose one to be the parent of the selected layer.

When a layer is parented, it takes its transform source from the ‘parent’ layer. If you move the parent layer, the ‘child’ layer also moves.

You can still transform the child layer on top of the transformation already applied from the parent layer. The child is transformed relative to the parent.

6.7. Creating Layers
6.9. Creating and Using Planes
Thanks for your feedback.