The Trimmer allows you to view media directly from the Media panel, regardless of whether the media has been used on any timelines within your project. This is useful for a variety of purposes.

After importing video files, you can preview the contents of each one to organize them in preparation for editing, or to identify the takes that you want to use in your edit. During editing, the Trimmer can be used to identify a specific section of a media asset before adding it to your timeline as a clip. This makes it easy to remove the start and end of a take, retaining the portion between ‘action’ and ‘cut’.

If you have already added a clip to the timeline, and need to trim it, you can also double-click the asset on the timeline to re-open it in the Trimmer, and adjust its In and Out points. Any adjustments you make will immediately be reflected on the timeline as well. 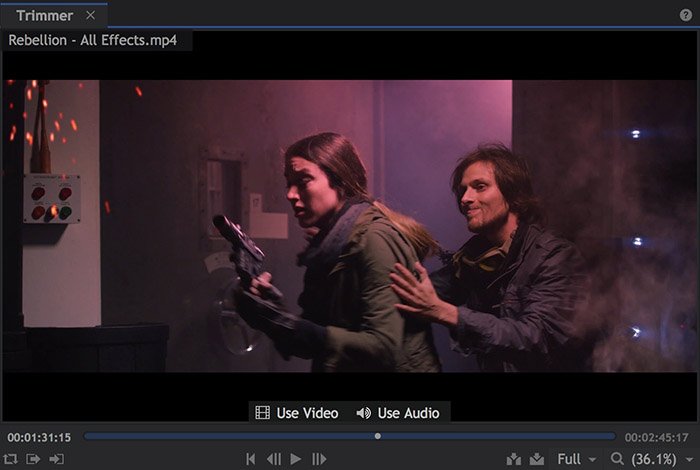 Playback on the Trimmer functions similarly to the Viewer, using similar playback tools. However, while playback is the primary function of the viewer, the trimmer has additional tools specifically for selecting portions of your clips and adding those portions to the timeline.

Along the bottom of the Trimmer are the playback controls.

The work area can be defined using the Set In and Out point buttons with the playhead at the desired frames. This can be particularly useful for looping playback around a specific cut or visual effects sequence.

Set In and Out Points

The in and out points define the start and end of the work area. This region of the asset is used when looping playback, and to define the section of an asset that you wish to add to the timeline.

The timeline playhead determines which frame is displayed in the viewer. The playhead can be controlled from the Viewer.

The In and Out buttons in the Trimmer (explained above) are used to specify the section of the asset which you wish to use. You can also use the keyboard shortcuts I (for In) and O (for Out) while playing the asset, to set the in and out points.

Adding Assets to the Timeline

You can drag from the Trimmer directly onto the timeline, allowing you to position the new clip precisely. A green outline displays the drop location on the timeline.

*Note that if you drag a clip from the Media panel the entire media asset will be used to create the clip, even if you’ve set up a trim section in the Trimmer. To use only the trimmed section, make sure you add the clip from the Trimmer.

If your source asset contains both audio and video elements, by default both will be included when you add the asset to the timeline. If you wish to only add one or the other, you can do so using the following tools.

Alternatively to dragging the clip from the viewer to the timeline, the Insert and Overlay buttons on the Trimmer can be used.

5.4. Media Properties
5.6. Adding Clips to the Timeline
Thanks for your feedback.