Transforming a layer means to change its position, scale or rotation.

In composite shots this can be done in 2D or 3D. The interfaces are largely the same, with 3D layers gaining the Z (depth) dimension. See “ in 3D for more details.

In the Viewer you will see a transform widget:

Dragging on the arrow will move the layer on the horizontal or vertical, while dragging on the blue square will rotate it. You can also click anywhere else on the layer to move it freely.

At the 4 corners of a layer are handles which can be dragged to resize it. Holding SHIFT maintains the aspect ratio, while holding ALT (OPT on Mac)) rotates the layer. Holding CTRL (CMD on Mac) will set the control point to the opposite corner, and resize the layer from that corner, rather than from the center. 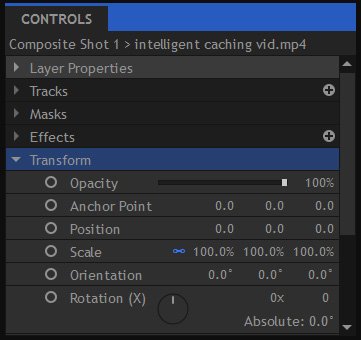 Clicking once on a property lets you type in a new value. Dragging on a value increases or decreases it.

Holding CTRL (CMD on Mac) and clicking on a positive Transform value will switch it to a negative value and vice versa (eg, -500 will become 500).

Every layer has an anchor point. This is the layer’s origin around which it rotates.

For example, if you had a simple rectangular plane and wanted to rotate it around one corner instead of its center, you would move the anchor point to that corner then use the normal rotation controls.

Some additional properties are available for 3D layers. These are discussed in the Working in 3D section.