To use media files in your project you need to first import them. Once imported they become assets in the Media panel, where they can be accessed and re-used as many times as you want.

Importing media to your project does not alter or affect the original source files on your computer, as HitFilm only references the original files. Therefore removing a clip from a timeline or from the Media panel does not remove it from your computer. Similarly, duplicating a clip in a HitFilm project does not create multiple copies of the source, as they all reference the same source.

Therefore if you wish to transfer a project to another computer you must make sure all project media is also included.

*The exception to this rule is with 3D objects, which are imported and stored in the project file. For more information see Importing 3D Models.

To import files to HitFilm you can use the Import button in the Media panel or drag files directly from a folder on your computer into the HitFilm interface. 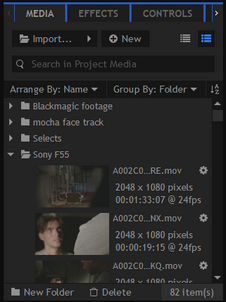 Clicking the triangular arrow to the right of the Import button displays additional import options.

Once an item is in the Media panel you can customize its properties by clicking the gear icon to its right, or choosing Properties from its menu.

If your video and audio are recorded in separate files, you can sync them in the HitFilm media panel. Select the video file in the media panel, then hold CTRL (CMD on Mac) and select the associated audio file. Right-click on either of the files, and select “Merge Audio/Video.” HitFilm will compare the audio in both files, synchronize them, then replace the original audio in the video with the audio file you selected. A new synchronized file will be created, and can then be edited on the timeline. For more info see Audio and Video Sync.

5. Editing
5.1.1. Supported Formats
Thanks for your feedback.